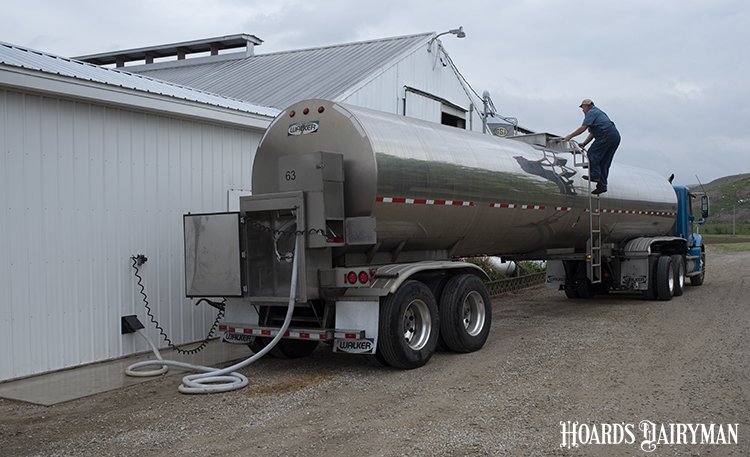 “The thing we’ve seen over time is that states and regions seem to either be specializing into or out of milk production,” laid out Mark Stephenson on the August 31 Hoard’s Dairyman DairyLivestream.

This fact comes as no great surprise to those in the dairy industry who have seen many cows as well as processing facilities move west in recent years, not to mention the farms that simply leave the business and aren’t replaced. But the less noticeable effect of this specialization for states with fewer and fewer farms while human population grows is a deficit of dairy products, starting with fluid milk.

This is most pronounced in the Southeast, as illustrated by the map below. When considering milk production versus population, Florida is the most dairy-deficient state, followed by Illinois and then North Carolina. The region’s climate is certainly one reason milk production is limited, and population growth plays another role. 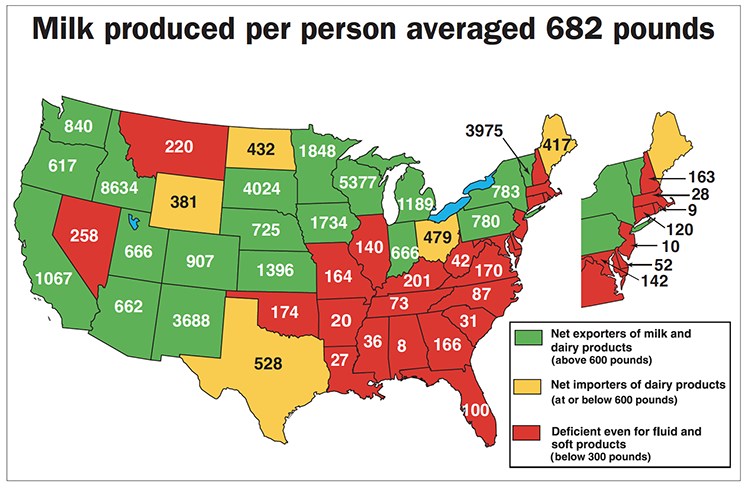 The map also shows a number of states that are surplus milk producers. In fact, when looking at the federal order structure, about half of the orders are deficient and half are in a surplus, noted Stephenson. Class I differentials were implemented to encourage fluid milk to move in the direction it was most needed to serve population centers to alleviate some of those deficits. But in today’s environment where the distances between those milksheds are hundreds, if not more, miles away, that incentive doesn’t hold as much power.

“The federal order differentials are designed to help us move some of that milk, but they are woefully inadequate; they are so old and need updating,” said Jeff Sims, chief market analysis officer for Lone Star Milk Producers based in Texas. “They just don’t pay near enough to attract milk to Class I, and the costs are getting exorbitant.”

The expense of hauling a product that is mostly water long distances to serve a population center means the deficit continues, and Sims sees it becoming a bigger and bigger concern.

“We’re rapidly getting to a place where dairy farmers are starting to ask whether it makes sense. Should we be supplying Class I if it’s so far away and it’s so expensive to serve?” he said. “At some point, we’ll hit a tipping point and say ‘No, we’re not going to. We’ll keep it at home and make cheese or powder.’”

Updating Class I differentials is one approach to solve the problem, Sims believes. Stephenson described it as not just a matter of changing the level of differential but evaluating if the mechanism even works in what is now a very different dairy environment.

Another option could be transportation credits, an incentive used in some Southeast orders to help attract supplemental milk in the fall. Expanding that incentive to other orders may help get milk to those markets, Sims added. Whatever the effort may be, it’s true that a changing dairy industry requires updated regulation.

To watch the recording of the August 31 DairyLivestream, go to the link above. The program recording is also available as an audio-only podcast on Spotify, Google Podcasts, Apple Podcasts, and downloadable from the Hoard’s Dairyman website.

The next broadcast of DairyLivestream will be on Wednesday, September 14 at 11 a.m. CT. As of January 2022, we moved to a new system. If you have not yet, you will need to re-register to continue receiving email updates and links to the webcasts. You can sign up here now. Registering once will sign you up for all future events.