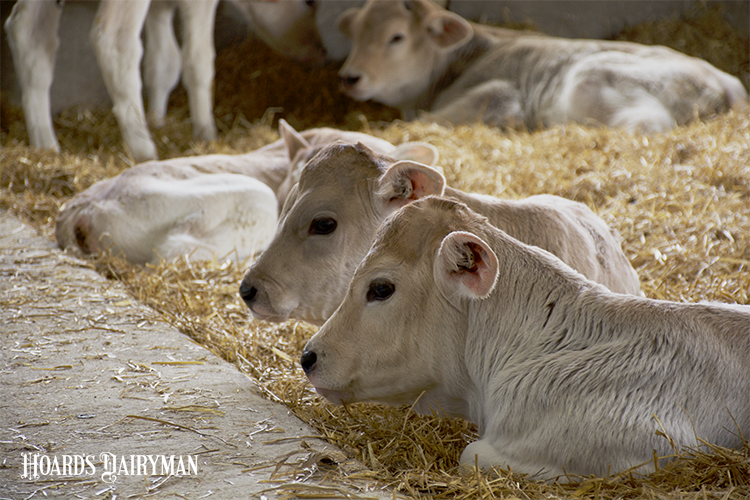 Not all farms have the space or labor on site to raise their own dairy replacements, so it is not uncommon for calves to be transported to a custom grower early in life. While this type of calf rearing system can work well for the farm and the animals alike, getting to their destination can present challenges, especially for young calves.

David Renaud, an assistant professor at the University of Guelph, noted that calves face an accumulation of stressors when they are transported long distances, commingled, and moved to a new location. During Australia’s recent Growing Beef from Dairy Conference, he shared results from a study that looked at the impact of long duration transportation on dairy calves.

Renaud and colleagues worked with dairy farms in Canada and evaluated the calves in the study prior to transport. The calves were then randomly assigned to be transported for six, 12, or 16 hours. All calves rode on the same trailer and were taken to the same calf raising facility. Health, growth, and physiological factors were tracked before, during, and for 14 days following transport.

There were 170 calves in the project, and Renaud said it yielded interesting results. The calves that were transported the longest (16 hours) had the highest rate of diarrhea, and those calves experienced an additional day of diarrhea compared to the calves that traveled six hours. The 16-hour group also had higher rates of respiratory disease.

Younger calves seemed to be more impacted by long travel times, as calves that were transported under 7 days of age were most likely to be affected by respiratory disease.

“Age when they depart the dairy farm also has a really important influence of their success when they reach their final destination in terms of ability to cope with the stress of transportation and their ability to perform well at the facility,” Renaud noted.

The calves in the 16-hour group also had lower glucose levels and higher body fat mobilization, which Renaud said was related to calves not being fed during transport, on top of other stressors such as heat or cold stress. These calves also took longer to recover to their pre-transportation body weight following the trailer ride.

While transporting calves long distances may be unavoidable for some farms, Renaud offered a few recommendations to help reduce the negative impacts. For starters, he said to provide a milk meal prior to transit, as this improves the calf’s ability to manage transport.

Upon arrival, calves should be provided with desirable growing conditions, including an advanced plane of nutrition and ample bedding.

Renaud also shared a small study that showed calves receiving a nonsteroidal anti-inflammatory drug (NSAID) prior to transport had better growth following an eight-hour trailer ride. The value of controlling inflammation and stress with NSAIDS is an area that can be explored more, he said.

And finally, he said minimizing the duration of transport is critical, as longer rides appear to have more long-lasting impacts on the calf. Still, managing transportation stressors are worthwhile, regardless of the distance of the trip.

“No matter how long we transport a calf, it is stressful. We need to take that into consideration,” Renaud concluded.