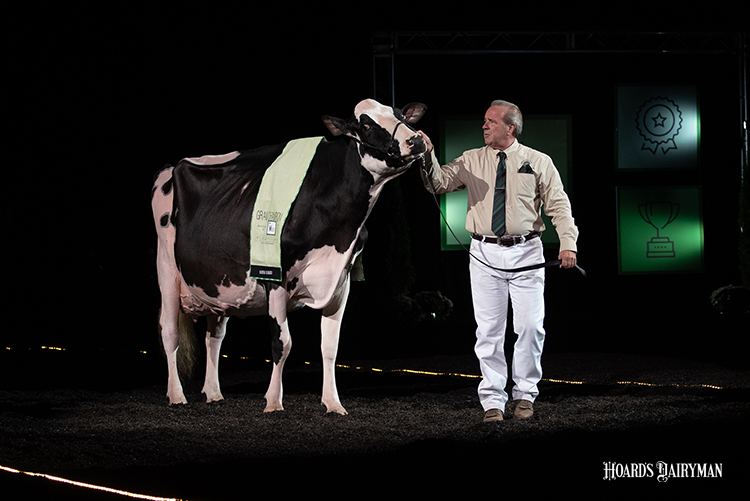 Even with its deep and rich history, World Dairy Expo was able to post a trio of new records at this year’s 55th show. As it turns out, cattle were front and center for all new benchmarks. If some of these records hold long term, each may receive coverage in the next rendition of the book We Need A Show that could be written at the show’s 75th anniversary.

A record 2,663 head were housed in the two pavilions and two tents during the 55th World Dairy Expo. Those numbers were up slightly from the previous high marks of 2,657 head stalled in 2008 and 2,644 animals on the grounds in 2011.

A major difference between this year’s show numbers and the two previous renditions that had over 2,600 head on site involved sale cattle. In 2008 and 2011, there were 153 and 155 head of sale cattle, respectively, at the Alliant Energy Center. This time around, 116 lots sold, and many were genomic offerings sold in absentia.

As this trend has unfolded, more cattle now go through the ring on show day. At the 2022 show, 2,433 head were placed by the judges, and this number does not consider the 258 head shown in the Junior Holstein Show. Of those 258 junior Holstein entries, some of those bovines also could have been shown later in the week at the Open Holstein Show. By way of comparison, 2,076 head went through the ring in 2008 and 2,036 head were evaluated in 2011. These totals do not include the Junior Holstein Show that had 157 and 226 head, respectively, in 2008 and 2011.

The Red and White Show has seen tremendous growth in both numbers and quality. At this year’s event, 372 head were placed during the breed show. That included 38 additional head above last year’s record 334 cattle. At the inaugural show in 1995, there were 123 head, and that number first crossed the 200-head plateau in 2002.