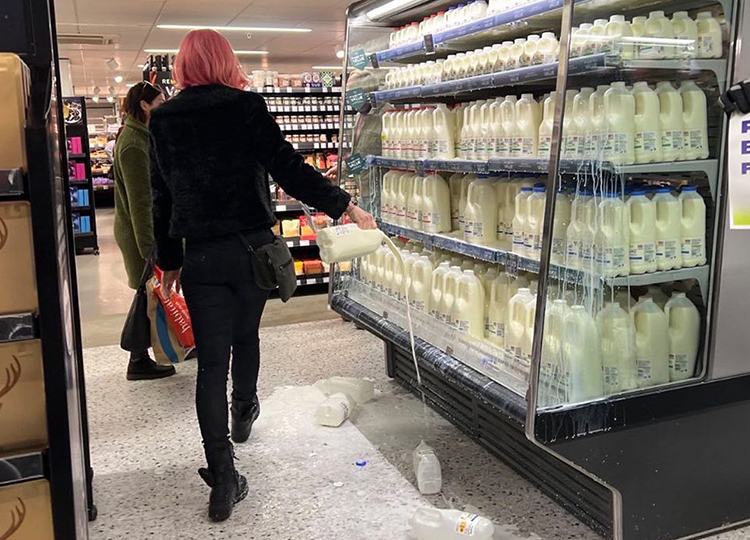 A new trend is pouring out of the United Kingdom.

Teenagers, apparently concerned about the earth’s environment, have decided that “milk pours” are the answer to climate change. On October 15, brazen youth began to show up at grocery stores, open containers of milk, and pour the contents out over meat counters, on floors, and even onto retail counters.

To document their deeds, the British youth video recorded their work and posted those clips to the Twitter feed Animal Rebellion. In a tweet posted on October 15, the group wrote, “Animal Rebellion supporters have just poured milk across the floor and over the dairy products at Fortnum & Mason, Piccadilly. We are calling on the government to support farmers in a transition to a plant-based food system.”

Milk Pours are currently happening across the UK. All are concerned individuals calling on the government to give us a livable future, a #PlantBasedFuture

Days earlier, before unleashing their vandalism, the group gave a prelude to their cause. “Animal farming is THE leading cause of the loss of our wildlife and natural ecosystems. The government MUST support farmers in an urgent transition to a #PlantBasedFoodSystem and all the freed-up land to be rewilded in order to restore wildlife populations,” they wrote on social media.

Will these protests and vandalistic behavior cross the Atlantic Ocean and take root in North America? Generally speaking, trends of this nature usually make their way here.