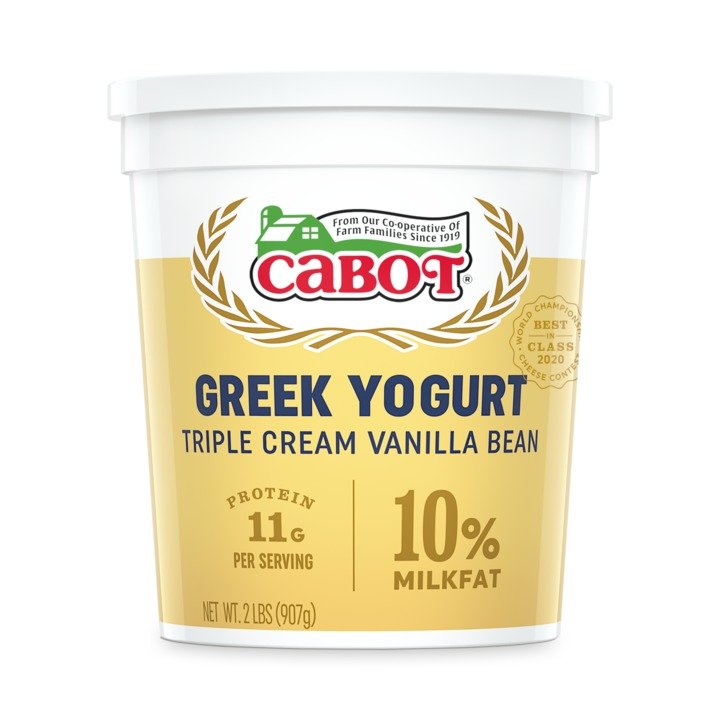 Cabot’s Triple Cream Vanilla Bean Greek Yogurt earned the Best Yogurt title and the Reserve Chairman’s award at the National Milk Producers Federation’s (NMPF) Annual Cheese & Yogurt Contest held earlier this week in Aurora, Colorado. The local cooperative had 9 top-three awards for its cheeses and yogurts. The annual contest recognizes the best cheese and yogurt products produced by NMPF’s member cooperatives. This is the first year that yogurt was included in the competition. Overall, the contest received 216 entries in 24 classes submitted by 13 NMPF member cooperatives.

“What an honor it is to have the top placing yogurt in the first year that yogurt has been a part of the contest, and to then add the Reserve Chairman honor on top of that,” said Rachael Richards, cultured product manager for Cabot. “We’re proud of the Cultured Team at the Cabot plant and the yogurt they make. Our Greek yogurt is the flagship of our cultured category. It’s rewarding to see the Triple Cream Vanilla take off and grow since we first launched it in 2019 and for it to win awards like this.”

In addition to yogurt wins, Cabot had five awards in the four cheddar categories. “Cheddar is what we’re known for,” remarked Earle Elliott, cheese grader and inventory manager for the cooperative. “It means a lot to win first and second place in both the medium and sharp cheddar categories.” Elliott noted that all three of Agri-Mark’s cheese production facilities had a cheddar that placed in the top three.

Outside of the standard cheddar groupings, Cabot’s Habanero Cheddar took first place in the Hot or Spicy category. Those who like heat will enjoy Cabot’s fieriest cheddar. It is a fan favorite among the hot chili-loving crowd according to Elliott.

“These awards show we’re not just good at cheese, we’re good at cultured products too,” said Elliott of Cabot’s success at the NMPF Cheese and Yogurt Competition.

Below is a listing of Cabot’s awards at the 2022 NMPF Cheese and Yogurt Contest: