How can we feed for better fertility? 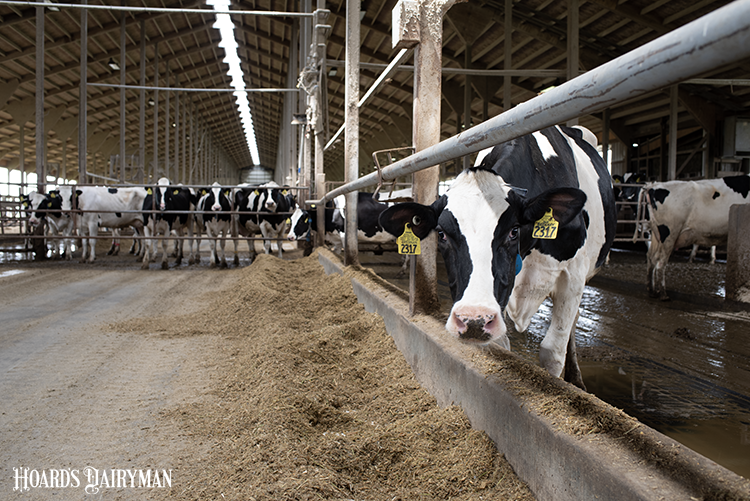 The dairy products our industry produces are easy to promote because they are full of important nutrients. Getting a balanced diet of those nutrients and more is critical for people of all ages to be healthier and perform to their best ability.

Likewise, our dairy cows need a complete diet to help them thrive and make that nutritious milk. For cows, thriving includes breeding back and being a productive member of the herd, and nutrition is one of the areas that farms can focus on to improve reproduction. Milo Wiltbank dug into this topic in a Dairy Cattle Reproduction Council webinar.

The University of Wisconsin-Madison reproduction expert first discussed two deficiencies that have been explored in relation to reproductive impact. Vitamin E accumulates in colostrum in the last three to four weeks before calving, leaving less in the body. A 2015 study tested how supplementing 1,000 international units (IU) at 21, 14, and 7 days prepartum affected reproductive performance.

Wiltbank explained that the supplementation reduced the incidence of retained placentas and that cows not receiving the extra vitamin E were significantly more likely to have a stillbirth. In the following lactation, supplementation reduced pregnancy loss and even contributed to a small gain in pregnancy rate. “Vitamin E before calving can have a pretty dramatic effect on the animal after calving,” summarized Wiltbank, noting that this study experimented with only the one supplementation level.

The other nutrient he pointed out in relation to deficiencies was phosphorus. “On dairies, there’s a lot of overfeeding of phosphorus,” Wiltbank actually noted, saying that there is a perspective that more can improve reproduction. However, a 2004 study found no difference in reproductive metrics between the cows fed recommended levels of phosphorus versus those on a higher plane.

From those two studies, Wiltbank advised that supplementation of certain nutrients can make a difference on reproduction only when there is actually a deficiency. If there’s not a deficiency, feeding in excess won’t lead to much of a response.

From a recently completed analysis of rations from 48 farms, he advised that higher fiber, lower starch diets boost fertility. They saw that when those diets had more starch and more non-fiber carbohydrates, reproduction declined, while the opposite was true for fiber. This may be because high starch and low neutral detergent fiber (NDF) reduces oocyte quality and immune health, the professor described.

He also noted that studies have shown that supplemental fat looks promising for reproduction. One that provided marine algae at 100 grams per cow per day saw improved pregnancies per A.I., particularly in first lactation animals.

The final nutritional factor has an indirect impact on reproduction by reducing the effects of some health issues, Wiltbank explained. He described a study where rumen-protected methionine supplementation allowed cows with health concerns (mostly metabolic) to produce more milk protein and get pregnant 24 days quicker than non-supplemented sick cows. This was much closer to the time frame healthy cows needed to get pregnant. For healthy cows, there was no effect on milk protein or time to pregnancy.

These represent just a few of the strategies farms may use to improve their reproductive performance, but as feeding affects breeding, it makes sense to do it well.