The most innovative and adaptive dairy show

Born from the desire and dreams to have a world-class dairy show, World Dairy Expo has developed into the world’s most-respected and most-renowned dairy event. That is largely due to innovative steps over the past 50 years.

As World Dairy Expo celebrates its 50th anniversary, these milestones help chronicle the key aspects . . . the cows, the trade show, the events, and the people.

1966 — Only the Milking Shorthorn breed calls the National Dairy Cattle Congress a national show that year. The impetus to develop a new show gathers steam. Hetts carries the “We Need A Show” flag.

1967 — The relationship between the University of Wisconsin-Madison and today’s World Dairy Expo begins to blossom. According to faculty lore, Dean Glenn Pound volunteers the entire dairy science faculty to serve as breed superintendents while others assist with other aspects of the show. In 1983, the newly formed UW School of Veterinary Medicine joins in facilitating activities at Expo.

1968 — Intercollegiate and 4-H dairy cattle judging contests are held for the first time. Two years later, the contests that had been held at Chicago’s International Dairy Show merges into the Madison, Wis., event.

1969 — The Veterans Memorial Coliseum becomes the permanent home to the cattle show after being completed two years earlier. An opening night banquet draws 2,000 people to the Coliseum floor.

1969 — The first Industry Person of the Year is selected by World Dairy Expo. Since then, Dairyman (1970), Dairy Woman (1973), and International Person (1982) of the Year have been added to the recognition program.

1970 — The National 4-H Dairy Conference, once held at Chicago’s International Dairy Show, moves to Madison to coincide with World Dairy Expo. This is also the year that World Dairy Expo moves to a five-day format.

1971 — Leaders representing a variety of dairy interests from across the U.S. meet in Madison, Wis., to discuss the need for a major trade show. The group purchases the assets of the World Food Agricultural Foundation’s World Dairy Expo. The common stock takes the name World Dairy Expo Inc. The dairy trade show, along with the dairy cattle show, begins to take equal focus moving forward.

1971 — National Dairy Shrine holds its annual meeting and recognition banquet at the show for the first time, marking the importance of Expo’s growing stature.

1972 — The University of Wisconsin-Madison’s Badger Dairy Club becomes a mainstay at World Dairy Expo, running nightlines in the early years. In recent years, club members log more than 5,000 hours before, during, and after the show.

1973 — The Klussendorf Association, formed in 1937, makes its first award presentation at the growing Madison show. By 1976, the “Dairy Cattle Exhibitor Hall of Fame” holds its first annual meeting at World Dairy Expo and has presented the Klussendorf Trophy at the event ever since.

1976 — While a few Canadians are showing at Expo by the early 1970s, Lowell Lindsay realizes many more Canadian exhibitors “were missing the boat” by not being there. That is why Lindsay, James Walker, and Joe Snyder formally organize a group of Ontario breeders to show cattle at World Dairy Expo.

1977 — The National Intercollegiate and National 4-H Dairy Cattle Judging Contests move to World Dairy Expo and set new records for teams with 36 each. One year earlier, the event was held at the North American Dairy Show in Columbus, Ohio. Prior to that, the event had been held at the National Dairy Cattle Congress, dating back to 1916.

1977 — With fewer bulls being shown, the Jerseys become the first breed to eliminate its bull show.

1980 — Junior 2-year-old classes are introduced for the first time.

1982 — The first Friend of Expo or FOE Award is bestowed to Dr. Jim Crowley who served as the show’s dairy cattle superintendent from 1969 to 1988. Joe Gilbert, longtime dairy trade show superintendent, won the second FOE honor.

1984 — Reflecting the importance of forages to dairy farming, the World Forage Analysis Superbowl is launched as a way to help educate farmers on growing and harvesting high-quality forage.

1984 — Youth showmanship competitions are initiated. They become a fixture with as many as 300 contestants in any given year in three age categories.

1985 — World Dairy Expo makes the switch from awarding ribbons to neck medallions. They could be worn around the neck and were much easier to handle than the conventional ribbons that often were stuffed into exhibitors’ pockets.

1986 — Without a doubt, one of the most significant changes to dairy cattle shows takes place when youth, or junior exhibitors, are recognized in all the breed shows.

1987 — Brookview Tony Charity earns her place as the best cow to ever walk across the colored shavings by capturing an unprecedented fourth Supreme Champion title for R. Peter Heffering. No cow had ever earned three Supreme titles, much less four. Charity was indeed “one of a kind” and her four titles, along with wins by previous herdmates in 1977 and 1981, gave Heffering six purple Supreme banners, an Expo record.

1988 — New General Manager Tom McKittrick teams up with longtime trade show volunteer and former interim general manager Joe Gilbert to grow the trade show from 300 exhibitors in 1987 to 600 the very next year.

1989 — The Post-Secondary Dairy Cattle Judging Contest is added to the World Dairy Expo portfolio as a contest for two-year college students.

1991 — The Duncan MacKenzie Award debuts with the same parameters of the Klussendorf Award but recognizes behind-the-scene efforts.

1993 — Milking Shorthorn Innisfail Lobelia 72nd-EXP becomes the first five-time champion of any breed. She was bred by California’s Stuart Rowe. 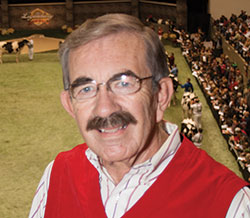 Dr. David Dickson
1994 — Perhaps the most legendary World Dairy Expo judge, Dr. David Dickson judges his record 14th breed show that year in a string that dates back to 1975.

1995 — The Exhibition Hall opens and its 100,000 square feet of unobstructed exhibit space with 30-foot-high ceilings soon becomes a catalyst to attract more companies, attendees, and international participants. At its debut, it is the largest convention facility in Wisconsin.

1995 — The International Red & White Show takes the stage and has been held consecutively ever since. The first-ever Red & White national show did take place in Madison, Wis., in 1968, but it would be almost three decades before returning.

1995 — A milking senior yearling class is introduced for the Jersey show. Other breeds quickly incorporate the idea.

1998 — As a way of partnering with other dairy organizations, World Dairy Expo develops a for-profit subsidiary called WDE Management Inc. That subsidiary now manages organizations such as the Purebred Dairy Cattle Association and the North American Intercollegiate Dairy Challenge.

2001 — Virtual farm tours replace actual farm tours at the show after a hoof-and-mouth disease outbreak in Europe. By doing so, virtual tours enable the program to expand to touring farms from all over the globe.

2003 — The inaugural Gregory Blaska Memorial Trophy is presented to the Supreme Champion in honor of the Expo president and pioneer. It replaces the Sidney Wanzer Memorial Trophy.

2003 — The World Dairy Expo Championship Dairy Products Contest gives a grand stage for the Wisconsin Dairy Products Association to promote its members and products on a national level. It draws a record 1,210 entries in 2015.

2004 — By winning both Supreme (Holstein) and Reserve Supreme Champion (Jersey), Arethusa Farm, Litchfield, Conn., becomes the first exhibitor to win both honors in the same year. 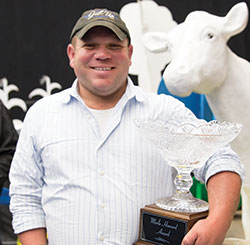 Robert Teixeira
2004 — The next evolution of youth recognition takes place with the addition of a separate junior Holstein show. The very first Merle Howard Award is bestowed to the show’s top junior exhibitor, with California’s Robert Teixeira winning the honor.

2005 — A tailor-made building located at 3310 Latham Drive in Madison, Wis., becomes the headquarters of World Dairy Expo. Previously, the organization had been housed at six different Madison locations.

2006 — Mark Rueth becomes the only person to own or co-own four different Supreme or Reserve Supreme Champions at the show when the Holstein Kinyon Linjet Ideal takes home Reserve Supreme honors. Rueth previously had three other cows named Supreme.

2007 — The Guernsey Indian Acres MM Pistachio Pie travels from her home in Massachusetts to make history by becoming the only cow of any breed to be named Supreme Champion of both the Junior and Open Shows for breeder and owner Ashley Sears. 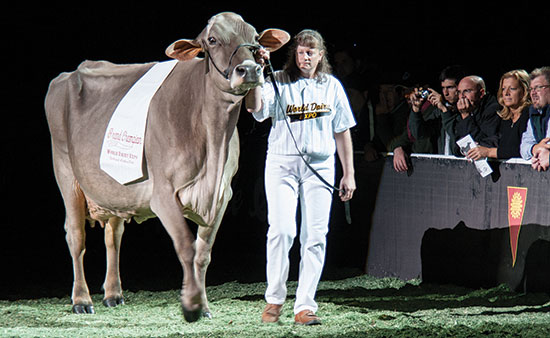 2009 — Old Mill E Snickerdoodle, a Brown Swiss, enters World Dairy Expo lore by claiming her sixth Grand Champion honor. No other cow, from any breed, has been able to claim such an accomplishment. Bred and owned by Allen Bassler Jr., Snickerdoodle earns those titles from 2002 to 2009.

2009 — The last bulls walk across the colored shavings as part of the Brown Swiss show.

2010 — A stand-alone fitting competition is added. Prior to that year, the fitting contest was a part of the senior-level showmanship event.

2015 — We Need A Show, a 200-page hardbound book, is released in honor of the upcoming 50th World Dairy Expo. The effort by 40-plus writers captures countless oral histories on the world’s greatest dairy show. 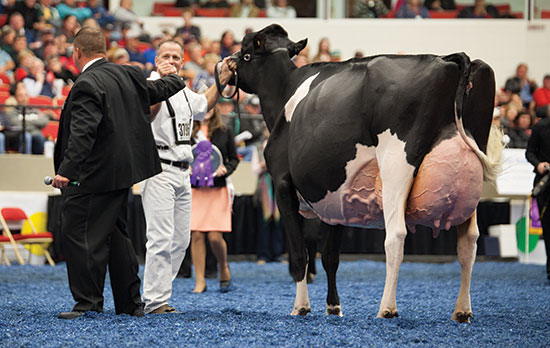 2015 — For the first time in World Dairy Expo history, three cows from one farm earn Grand Champion honors in respective breed shows. The winning Red & White, Holstein, and Jersey all hail from MilkSource Genetics of Kaukauna, Wis. The Holstein goes on to be crowned Supreme Champion with the Jersey taking Reserve.

It was all purple for the Red and Whites
Hoards at Expo
Related to:
HAE, WDE, history, Celebrate50
In Hoards at Expo