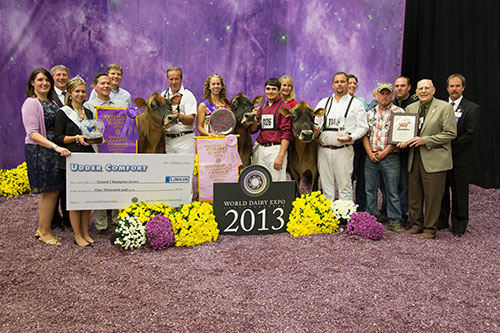 There were an impressive 357 entries at the International Jersey Show, beginning with the heifer show on Tuesday and ending with the cow show yesterday afternoon. Judge Callum McKinven of Canton de Hatley, Quebec, and Associate Judge Stephan Borland of Ormstown, Quebec, had the incredible task of placing the world's finest Jerseys.

Senior-3-year old Page-Crest Excitation Karlie, of Arethusa Farm in Connecticut, was selected as Intermediate Champion. Payneside GG Got Milk, owned by the Sauder family of Illinois, followed. The Sauder family also took top honors in the Junior show, with Senior Champion and Grand Champion Willdina Jade Bee. Four-Hills 1st Blue 3241-ET, owned by Britney and Megan Hill of Vermont, was Reserve for both Senior and Grand Champion of the Junior Show.

Ultimately, the Excitation daughters came out on top. Judge McKinven recognized that Page-Crest Excitation Karlie is a young cow, but encouraged everyone to "look at the mammary system on that cow, look at the dairyness and quality and the open rib." It was Karlie's "dairy edge" that carried her over Reserve Grand Champion Stoney Point Excitation Jamie. Premier Breeder went to Ratliff Jerseys of Kansas and Premier Exhibitor went to River Valley Jerseys of Illinois.

The author is the 25th Hoard's Dairyman editorial intern. She will be a senior at California Polytechnic State University in San Luis Obispo. At Cal Poly, Taylor is majoring in dairy science with an agricultural communications minor. Pires grew up on a 500-cow dairy in Merced County, Calif.
Related

Hoards at Expo
Gouda from the Netherlands to your backyard
...
comments powered by Disqus