Age is just a number 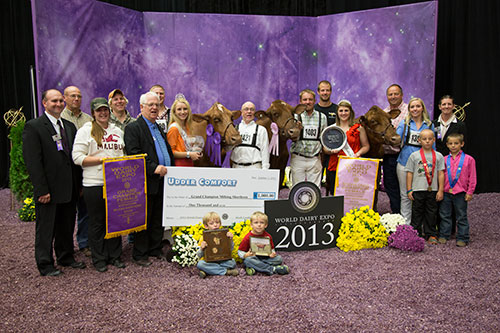 Two hundred and two cattle were exhibited at the 2013 International Milking Shorthorn show. Judge Lynn Harbaugh of Marion, Wis., and Associate Judge Katie Bue of Alma Center, Wis., were hard at work Tuesday and Wednesday evaluating the world-class Milking Shorthorns. The ultimate champion was 10-year-old Lands-Brook Christina-EXP-ET, owned by Jordan Landsgard of Lands-Brook Farms in Iowa. Christina, who is no stranger to the show ring, was honored with Senior and Grand Champion. Reserve Senior and Grand Champion honors went to 5-year-old Halpins Mona II, owned by Mackinson, G and M Halpin of Halpin Farms in Illinois.

Premier Breeder was awarded to the Innisfail Herd in California, and Premier Exhibitor went to Halpin Farms in Illinois.

Hoards at Expo
Gouda from the Netherlands to your backyard
...
comments powered by Disqus