McDonald's, Domino's, Quaker Foods and Taco Bell are among the win-win partnerships for dairy and the companies involved.

The longest-standing DMI partnership dates back almost a decade with McDonald's. It began with one simple step - offering milk in a plastic bottle with Happy Meals, noted Steve Maddox outgoing chair of the National Dairy Board. Since then, the partnership has introduced McCafé which is an entire line of dairy-flavored drinks. According to Darci Forrest, senior director of marketing, McCafé sales are a growth engine for McDonald's. As for the future, the DMI-McDonald's partnership introduced 27 new dairy-based products alone this past year. 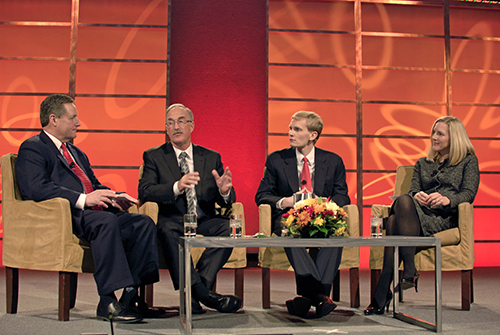 As for the more recently forged DMI-Taco Bell partnership . . . Taco Bell has some 6,000 stores that serve 35 million customers per week. In 90 percent of its menu options, dairy accompanies the food. As Taco Bell develops more dairy-based menu options this year, the fast food chain expects it will use 1.7 billion pounds of milk. this year. Running some rough math, that would employ 78,350 cows based on the U.S. annual milk production of 21,697 pounds per cow in 2012. Next year, Brian Niccol, president of Taco Bell expects the chain will use 2 billion pounds of dairy products or enough milk to employ nearly 92,000 cows.

A day earlier at the annual meeting in Phoenix, Ariz., Steve Maddox echoed a similar message, "We're getting phone calls from other (food) companies due to the success of these partnerships."