By Hoard's Dairyman staff   @hoardsdairyman
It was a chilly Tuesday, December 17 in Hastings, Minn., but yesterday the mood at Bremer Farms was warmed with excitement. After winning the National Dairy Council's "Show Your Pride" contest, they learned that NFL running back Toby Gerhart would be visiting their farm. First, the family welcomed him into the garage where they talked about Vikings football, his diet and his hometown. Then, Toby got a tour of the farm and even helped with calf feeding.

Toby Gerhart is backup running back for the Minnesota Vikings. He was runner-up for the Heisman Trophy while at Stanford, and set the California rushing record in high school. But, he seemed right at home at the Bremer's. That may be because his hometown of Norco, Calif., is nicknamed HorseTown USA. Gerhart even dated a dairy farmer's daughter in high school and recalls taking a golf cart tour of the family's ranch.
The Bremers are a three-generation farm that dates back to 1952. Roy and Karen, their son John, his wife Janet, and their kids Sara and Michael all work together to keep the operation successful. They milk 120 Holsteins and own 270 acres of land.
When word of the contest came out, Sara, also an eighth-grade teacher, decided that if they were going to try, they were going to go all out. She painted a gate gold and made a sofa slipcover purple to represent Vikings colors. Then, she got the family dressed up in Vikings garb and brought out a TV so the heifers could watch the game. A friend snapped the photo, and the result can be seen below. 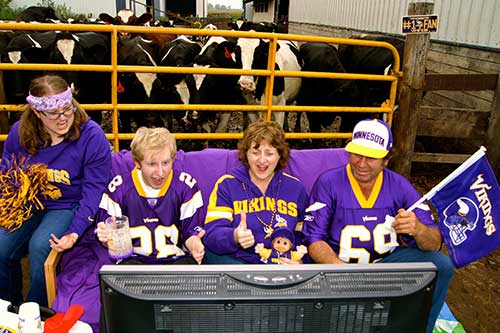 At Tuesday's event Sherry Newell, of Midwest Dairy, introduced Gerhart to the gathering of Twin Cities media and Minnesota farm media. She jokingly thanked Viking's head coach Leslie Frasier for holding Gerhart out of last week's win over the Philadelphia Eagles to ensure he had enough energy to feed the calves.

Gerhart didn't miss a beat, saying, "Put me to work!" Although he had the chance to leave, Gerhart asked to see the rest of the farm when the media departed.

This isn't the first time the Bremers met Gerhart. Earlier this summer, the Minnesota farm family met Gerhart as they promoted the opening of a Minneapolis playground through the Fuel Up to Play 60 campaign.

Although it was her first time feeding calves with an NFL player, Sara Bremer took on the task like a pro. "This has been a wonderful day," Sara said. "Hopefully he enjoyed himself, and I think he has based on the number of times I've seen him smile."

You can visit Janet Bremer's blog at http://mybarnyardview.blogspot.com/.

You can read more about Dairy Promotion in other HD Notebook posts. 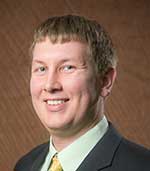 The author is a graduate student in animal science at the University of Minnesota. He lives on his wife's home farm near Brooten, Minn., and is a former Hoard's Dairyman Associate Editor.