Building on tradition and strong cow families, Scott and Laurie Langmaid, along with their three sons, continue to breed outstanding females at Vermont Pond View Farm. 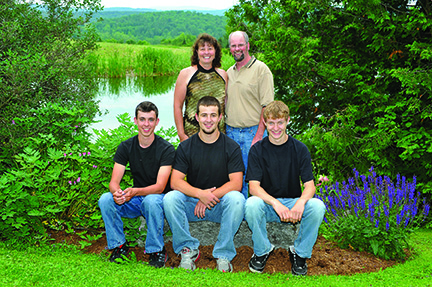 Scott and Laurie Langmaid and their three sons, pictured from left to right, Bradley, Ross and Trevor.
Scott and Laurie Langmaid of Danville, Vt., have been selected by the Klussendorf Association as the sixth recipient of the Robert "Whitey" McKown Master Breeder Award. This award recognizes a well-managed breeder herd that has been successful at showing and judging and emphasizes all qualities of the Klussendorf Award, including ability, character, endeavor and sportsmanship.

The farm has been in Scott's family for six generations and more than 200 years. In 2001, Scott and Laurie took over the dairy and have continued to grow the recognition of the herd.

The tradition of excellence runs deep in the cow families that the Langmaids develop. Several of the more prominent cows that wear the VT-Pond-View prefix (short for Vermont Pond View) come from lines that date back to cow families purchased by Hugh. This includes VT-Pond-View Round Oak Sue, EX-94, whose line produced two Excellent 95-point cows, and VT-Pond-View Charisma-ET, EX-95, whose line produced three Excellent 94-point cows. The Swampy Hollow Elevation Sweet, EX-92, 3E cow family also has played a large role in the herd.

Twin-Wind TC Broker Lass, EX-95, was the foundation cow of another of the more prominent breeding lines on the farm. The cow was purchased by the Langmaids in 1990 and has left her mark by producing nine Excellent daughters and several Excellent granddaughters.
In 2011, VT-Pond-View Goldwyn Libby-ET, the granddaughter of Lass, was recognized as the Unanimous All American and All Canadian Spring Yearling winning the spring yearling class and junior champion honors at the Royal Winter Fair, New York State Fair and Maryland State Fair. The family has also earned All American Best Three Females in 1991. That same year they earned Reserve All American Produce of Dam, an honor they repeated in 1994.

A dedication to breeding and developing good cow families alongside the pond in northeastern Vermont has earned the Langmaids the honor of being named the 2014 McKown Master Breeder.