Dairying would be in profound trouble if the government had to make full payments. 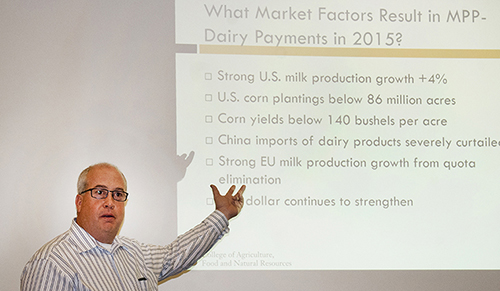 Thousands of pages have been written about what the Margin Protection Program for Dairy (MPP) is and how it will work. This isn't another one.

Instead, it's a highly unlikely, but still reality-based, look at what it might take for every dairy that signs up for MPP to collect maximum payments during 2015 – payments that, frankly, would mean the dairy industry was in dire trouble if they occurred.

The short version: imagine 2009 all over again.

The long version is serious food for thought from dairy economist Scott Brown (pictured above) at the University of Missouri, who helped USDA design the program.

Speaking at a series of four producer MPP meetings across Idaho this week, Brown pointed out that all of the elements that might trigger a 2009-scale meltdown in 2015 are familiar and/or at least partly in sight today:

"Another 2009 is a worst-case scenario," he admitted. "But is it repeatable? Yes. Is it likely? No. My point is that we're not done seeing milk prices of $12 to $13 in the U.S. I don't know when they'll happen, but I don't think we're done, especially with the way feed costs are coming down."

That's the outline for a worst-case MPP scenario – an explosion in feed costs and a collapse in milk prices that slash income over feed costs (IOFC) to zero. At that point, every dairy that signed up for even the "free" minimum coverage of $4 per hundredweight would collect full payments.

But seriously, how much good would they do? Because if the U.S. dairy industry ever sees an IOFC situation again that approaches $0, MPP checks won't come close to helping many farms survive.

I am one biased farmer
HD Notebook
Related to:
HDN, MPP-Dairy
In HD Notebook