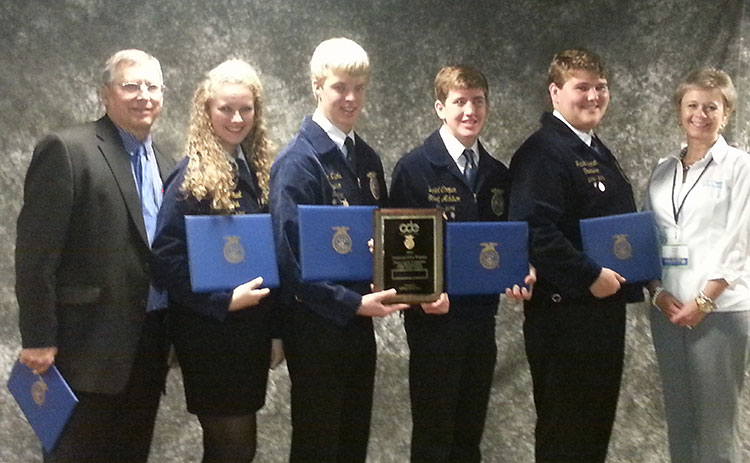 Winning the 2014 National FFA Contest was Kentucky's Spencer County FFA. They amassed a whopping 241 more points than the nearest competitor! How did they do that? With four of the top eight individuals! Jacob Barrett (3rd), James Nichols (4th), Rachel Sibert (7th) and Daniel Cooper (8th). They also won the team presentation portion. Rounding out the top five states were California FFA, Illinois FFA, Wisconsin FFA and Ohio FFA.

The high individual in the contest was Isabelle Leonard of Riverheads FFA in Virginia. She won her state FFA contest and was a member of the high team at the All-American Dairy Show's FFA Judging contest last month. She was followed by Tanner Topp from the Northwestern FFA chapter in Ohio in second. This Buckeye earned ninth individual in the National 4-H contest earlier this month, too. Cole Leonard, brother to the high individual, earned fifth high individual honors. With the highest score on the written exam, Gustine FFA's Tony Lopes finished sixth overall and helped his California team to their second place team finish. Completing the group were Allie Kaloss from Urbana FFA in Maryland in ninth and Arthur Moser of Prairie Central FFA in Illinois in tenth.

The top three individuals were presented their awards on stage at the National FFA Convention in front of 60,000 FFA members and supporters in Louisville, Ky., last Friday.

The contest consists of judging six classes, giving three sets of reasons, taking a 50-question exam (including DHI record understanding) and participating in a dairy farm evaluation exercise. Housing and facilities were the focus area of the team event this year. Each of the students contributes to the 10-minute team presentation as they offer a consultant viewpoint of the dairy. Judges then have five minutes to ask the team questions.

Unique to this contest is that all four team members' scores count in the final tally. There is no alternate and no dropped scores, so every team member needs to be "on" for the two-day event to help their team earn valuable points.

Competition at the state level is stiff, so just advancing to the national contest is an achievement itself. In the past three years, including this year, only one local FFA chapter has three-peated to place in the top 10 nationally back-to-back-to-back. That is this year's top team, Kentucky's Spencer County FFA, coached by Bland Baird. They won the contest in 2013 after finishing fifth in 2012. Bland's teams also won the contest in 2011, 2008 and 2005. Several teams have had-back-to-back appearances, but only Kentucky has done it for the last three years running.

Here is a slide show of the 2014 FFA judging teams.

Dairy Handling Competition
While some FFA members are judging, others are being evaluated on their dairy handling skills. One FFA member from each state can enter this contest, and they lead the animals in the judging contest. The top individuals for 2014 were Jared Halsey of Pennsylvania and Renee Pierick of Wisconsin.


To read more about Youth Programs, follow this link.