What accounts for the size differences between calves in the showring? 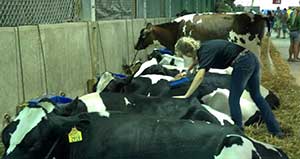 There are two factors that contribute to an animal's appearance – genetics and the care it receives.

We posted an editorial, The permanent fix for over-aged show calves, sharing the idea of randomly selecting calf class breakdowns to minimize fudging ages in order to have the largest animal in the class. There was social media feedback and, unfortunately, there will be people who blur the lines. However, a big heifer doesn't automatically mean the birthdate was falsified.

There are variances between bulls. Below are the linear traits for two bulls. One has high (positive) values for stature, body depth, dairy form and rump width. This bull will typically sire daughters that are taller, more dairy, deeper bodied and wider than the average. The other has significantly lower values, but sires offspring slightly higher than average. It's not surprising that the first bull has many show-winning daughters (heifers and cows) while the other has not.

When choosing a bull to sire a 4-H project, think ahead. What do you want the offspring to look like or produce? If high production is your farm's focus, choosing a bull that produces high-type daughters that may sacrifice milk production might not be a path you want to take. On the other hand, it's just one calf. If it's going to be your child's calf, you may consider different breeding philosophies.

After you've addressed the calf's conformation, focus on management, including her ration. On most farms a 4-H calf will stay with its herdmates until show preparations begin. The logistics of separating one calf and providing specialized feed and care is not always realistic. By comparison, youth with one animal and backyard facilities to give calves ultra-attention may have an advantage.

Think of it this way. The diet of a heavy-weight wrestler in training is different than a ballerina. They have unique nutritional needs due to size and performance. The same can be said for dairy cattle. A high energy, corn-silage based diet is the staple for most lactating dairy cows. It's not what a 6-month-old calf should consume. Picture the ballerina after weeks on the wrestler's diet.

There's a saying . . . "You can put lipstick on a pig, but it's still a pig." Even with the best fitting job, an over-conditioned (fat) heifer will still be fat. A well-carved topline might minimize rounded shoulders and patchy rump, but judges see through hair.

Those that excel in the showring pay attention to all the details – sire selection, nutrition and animal care. Field days and seminars educate leaders and youth exhibitors on how to feed and manage heifers.

It's unfair to assume that every large calf is the result of an erroneous birthdate. Some people take meticulous care of their project year round and the result is a well-grown heifer. If you find yourself on the opposite end of the lineup, take time to evaluate the genetics and the management your calf receives. Maybe choose a bull that focuses on type or consider a ration change for fair animals. Instead of assuming the worst, ask those with larger heifers how they care for their animal. Their advice might help you move up the line next year.