New and unique flavors of milk could be part of the solution to reversing a slump in fluid milk consumption. 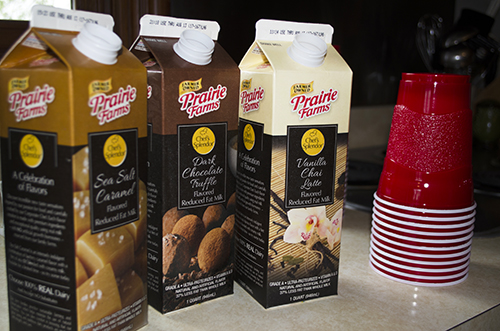 Dairy products come in an assortment of flavors for people to enjoy. For example, Baskin Robbins touts its 31 flavors of ice cream in nearly all of their advertisements, and that same variety can be appropriated to yogurts and cheeses as well.

If other dairy products offer a plethora of flavors to satisfy even the strangest of cravings, why is it nearly impossible to find flavored milk that isn't chocolate milk?

Milk alternatives like soy and almond beverages at least offer vanilla in their lineups. When it comes down to it, people make their food choices based on flavor; many people don't care for the taste of plain milk and believe it or not, some people don't like chocolate.

However, those limited options could change for millions of people living in the Upper Midwest. Prairie Farms, a milk marketing cooperative in Illinois, is set to introduce a line of flavored milks this year. The flavors include vanilla chai latte, dark chocolate truffle, and sea salt caramel. All three milks play on popular flavor trends that have been sweeping coffee houses, candy shops and ice cream parlors across the country recently. These flavored milks are decadent and delicious based on my sampling last week. Most of all, these milks are something different, which is what the dairy industry might just need.

It's been long known that most Americans don't consume enough dairy products, and total consumption has been on the decline since the 1940s. Researchers at the United States Department of Agriculture's Economic Research Service (ERS) have been tracking this trend for decades, and while consumption of lower-fat milk has improved, today's kids are drinking less milk than their parents and grandparents did. Research suggests that children may drink less milk once they are introduced to other beverages.

ERS researchers also noted that soft drinks, sports drinks, and other beverages are widening their selections and developing new flavors decade by decade. Milk, on the contrary, has remained static with chocolate – and sometimes strawberry – being the only flavored options in the dairy aisle for most Americans.

Milk is nature's most nearly perfect food, but consumers are losing sight of that as they turn to "healthy" alternatives that are laden with artificial ingredients. Giving milk a little extra pizzazz and variety may be the answer to a problem that has plagued the industry for decades.

Dairy can be part of a New Year’s resolution
HD Notebook
Related to:
HDN, dairy products
In HD Notebook