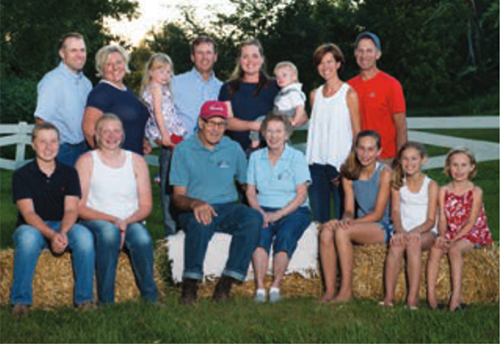 Walk-Era Holsteins of Wisconsin Dells, Wis., has been named as the 2015 McKown
Master Breeder award winner. Standing, (L to R): John, Marci, Nora, Tom, Jackie, Nash, Tracy and Tim. Sitting, (L to R): Brett, Alli, Dean, Dori, Gracie, Libby and Emmy
The seventh annual Robert "Whitey" McKown Master Breeder Award is awarded to the Walker family of Walk-Era Holsteins, Wisconsin Dells, Wis. The honor will be presented at the 49th World Dairy Expo in Madison, Wis. This prestigious award recognizes a well-managed breeder herd that has been successful at showing and judging and emphasizes all qualities of the Klussendorf Award, including ability, character, endeavor and sportsmanship.

In 1936, Erwin and Ella Walker established the family farm that has grown to a position of excellence within the Holstein breed. Their son Dean married his wife, Dori, in 1957 and took over the farm that same year. These days, Dean and Dori, along with their three sons and daughters-in-law - John and Marci, Tim and Tracy, and Tom and Jackie - are actively involved with the farm. The entire family enjoys showing cattle, including Dean and Dori's seven grandchildren.

John's wife, Marci, has served the Wisconsin Holstein Association as president, vice president and secretary. Meanwhile, Tom has been a longtime director at Allied Cooperative, based in Adams, Wis., serving in the capacities of chair, vice chair and secretary. John is currently serving on the Columbia County Farm Bureau board and previously served on the DHI board. Both John and Tim have been local Holstein board officers. Over the years, Dean has chaired the boards of Badgerland Farm Credit and Alto Co-op Creamery.

Walk-Era Holsteins' slogan, "Where Dreams of Excellence Are Bred," has never rang more true. At this point in time, the farm has bred 108 Excellent cows. With a breed age average (BAA) of 110.1 percent, the current 96 percent homebred herd has 27 Excellent, 60 Very Good and 8 Good Plus cows. They are nine-time qualifiers for the Progressive Breeders Registry Award and five-time Premier Breeder or Premier Exhibitor winners at the Wisconsin District 5 Holstein Show. Walk-Era cows not only look good, but they are productive as well. The farm's rolling herd average with 100 milking cows is 23,684 pounds with 4.04 percent fat and 3.21 percent protein.

Walk-Era Holsteins prides themselves on developing strong cow families that can stand the test of time. They are also proud of the area they call home. Their 825-acre farm made the perfect location for the 2014 Columbia County Dairy Breakfast. In addition, they deeply care about the future of the Holstein breed and dairy farming, which is shown by their involvement in the community.

The Walker family is a prime example of what it means to be named a McKown Master Breeder. They are driven by passion, determination and, above all, love of farming and of family.

The author is a graduate of the University of Wisconsin-River Falls, with a major in agricultural marketing communications. She was the 27th Hoard's Dairyman editorial summer intern.

HD Notebook
Our bread, our butter, our pals 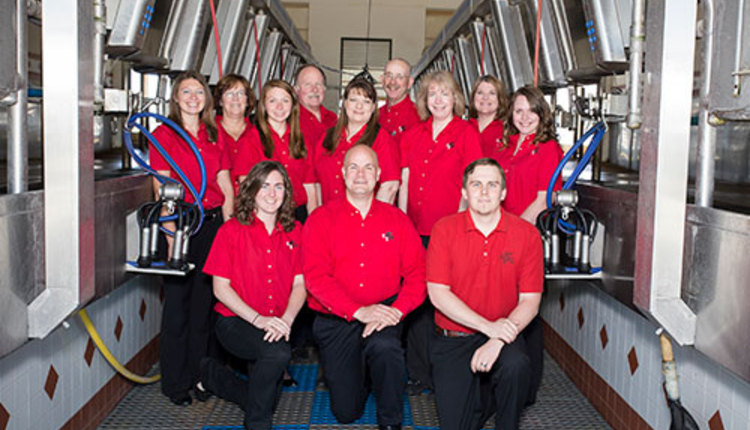