To beat the heat, the nation's cows are concentrated in more temperate regions of the United States.

Dairymen know that cows tend to seek out the coolest places on the farm: beneath shade, under sprinklers and in front of fans. Growing up on my family's dairy farm, I remember cows crowding around the water tank or under that one patch of trees in the pasture on hot, sunny days.

During the dog days of August, temperatures can rise to uncomfortable levels in even the most well ventilated, animal friendly barns, leaving cows on a hunt for the coolest spot available.

Similarly, farmers in the United States have also sought out the coolest places to dairy. Take a look at the map below. Certain parts of the country are more cow dense than others. Those areas with more cows tend to be in states with more temperate climates: California's Central Valley, Idaho, New York, Pennsylvania and Wisconsin. On the other hand, there are fewer cows in the muggy Gulf Coast region in states like Texas, Louisiana, Mississippi, Alabama and Florida. 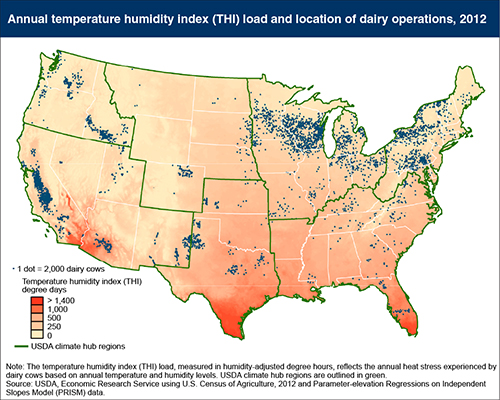 Like people, animals experience heat stress when temperatures reach a certain level. Dairy cattle in particular are more sensitive to elevated temperatures, and hot weather can lower milk production and reduce the percent of fat, protein, lactose and other solids in milk.

It's not just the temperature that affects cows; more often, it's the combination of heat and humidity. A measurement called the Temperature Humidity Index (THI) is used to determine the impact both heat and humidity have on dairy cattle. Research has shown that milk yield losses are already apparent when the THI reaches 68. The chart below can be used to determine the level of heat stress experienced by dairy cattle when temperatures and humidity reach a certain point. 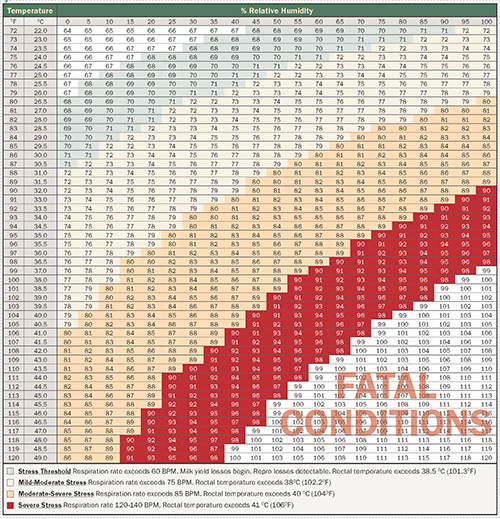 The view from my side of the fence
HD Notebook

This, too, shall pass
HD Notebook

Farming through a quarantine
HD Notebook

The view from my side of the fence

It’s the uncertainty that’s scaring me