Researchers are delving into animal personalities and the effects they have on production. 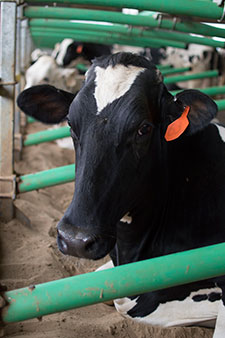 They have personalities. For anyone who has managed cattle or spent much time around them at all, it is pretty easy to confirm bovines exhibit behavioral traits that vary from animal to animal. Their own little ticks if you will. In recent years, researchers throughout the world have begun to quantify correlations between these traits, cows' personalities and animal productivity.

One such research project in Sweden recently identified correlations between low milk production and certain cow behaviors such as stepping (shifting weight from one leg to the other) during milking and facing the herd while in social isolation. These animals produced less milk than their herdmates and were categorized as showing more nervousness.

The findings, published in the Journal of Dairy Science, were not universally applicable however. Specifically, they found differences between breeds in the amount of correlation between certain traits and production. Researchers found that kicking during milking correlated with lower energy corrected milk production in first lactation Holsteins while first lactation Swedish Red and Whites that kicked actually produced more energy corrected milk. The researchers concluded that personality traits such as nervousness do play a part in production, but further research is required to identify the degree and type of correlation between behavior and production traits.

Another research project completed in Australia showed that subordinate cows were more likely to use their left eye to interact with other cows or employees. These cows would be characterized as timid in their personalities and behaviors. They tended to have a more restless disposition and heightened flight or fight responses. They were also categorized as lower in productivity and body condition score.

For now, producers and researchers are still determining how best to use results from studies such as these. Time will tell how the information might be incorporated into herd management protocol.

The author is the Special Publications editor. She is responsible for development and marketing of books and plans, as well as coordinating internal communication pieces. Maggie was raised on a 150-cow dairy near Valley Center, Kan. and graduated from Kansas State University with degrees in agricultural communications and animal sciences.