Showmanship competitors in it for the long haul

Three Canadians rose to the top

It lasted hours, but the rewards were great for three outstanding young people. Three divisions of youth participated in the showmanship contest at World Dairy Expo. Starting after the conclusion of the Guernsey and Red & White Heifer Shows, multiple heats narrowed down the pool of over 300 exhibitors representing 25 states and three provinces. Just after 10 p.m. on Thursday, the winners were finally determined. 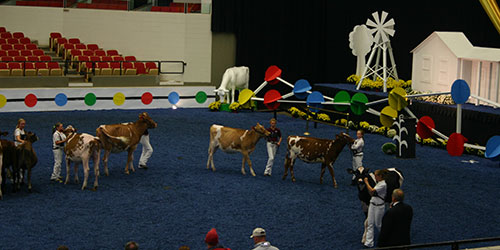 In the Junior division, Wisconsin's Brian Behnke served as the official. Prior to delivering his reasons, he reminded exhibitors that there is a showmanship scorecard that was updated in 2011, and that served as his guide to place the class. Behnke encouraged youth to check out "Leading to Win" book or CD that helps explain, in great detail, the new scorecard. The basic things of leading forward until all animals have entered, then turning to walk backwards to show the animal was reiterated. He also touched on appropriate showmanship attire, detailing the World Dairy Expo's showmanship rule of white pants, white top or official junior exhibitor shirts, which all junior exhibitors are given to wear during their respective breed classes.

Behnke selected Savannah Crack of Quebec to top the junior class. She was followed by Brooke Krueger and Ashlyn Sarbacker, both of Wisconsin.
Kathy Beerwort of Lookout Holsteins and Jerseys in Quebec evaluated the Intermediate division leadspeople. One of her deciding factors was the efficiency in which exhibitors were able to turn and walk in the correct direction and having an appropriate space between the animal in front of the exhibitor when parading around the ring. Madison Dyment of Ontario was the top-placing Intermediate showman, parading her Jersey calf. Second and third place went to Wisconsin's Joey Opsal and Olivia Brandenburg.