FFA Judging: Building on past experience

Each year new knowledge and skills were gained.

By Patti Hurtgen, Online Media Manager
So, how do teams that win, well . . . win? 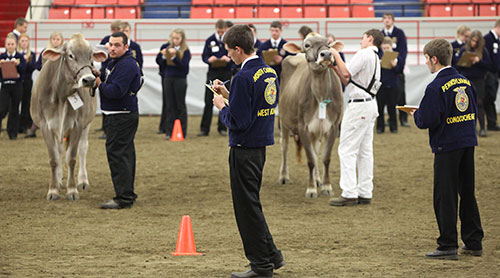 I asked one of those teams, "Why did you win?"

One of the seniors had this to say, “I think we won because we worked hard for it, we started practicing for the test in October and studied a lot on our own time. My teammates and I have worked and practiced as a team because we know it takes a team effort to win.”

“I guess every team studies differently, but what really helped us was experiencing the farm. We would go outside to the farm and physically go through different feeds, medicines, and milking equipment. I believe this hands on experience was a big part of our winning,” shared the other senior on the team.

It takes practice and commitment from the four team members, their families and coaches. The national FFA contest and some state contests require all four students’ scores to count in the overall rankings. So, there can be no “warm bodies” on contest day waiting to be the dropped score. Everyone needs to put forth his or her full effort.

FFA Career Development Events (CDE) are held each year. They provide high school FFA members the opportunity to test their knowledge and skills in their favorite discipline – for many that’s dairy judging.

Many dairy youth have competed in 4-H dairy judging contests, but most FFA contests have additional segments to their contest. In addition to class placings and oral reasons, contests may include a written exam and linear scoring. So, while 4-H may have provided a strong base for FFA judging, there are more components to the puzzle.

I encountered a team that recently won their state FFA dairy judging contest among 38 full teams. They have been judging together for three years. Two of the team members are juniors and two are seniors. The elder two members judged together as freshman and were on the 33rd placed team. Not the greatest debut.

The following year, two freshman joined the team. In their first year together (2014) the team placed 11th overall at the state contest. Last year, they moved to third place. And, a few weeks ago, they took the top spot.

Three years together has helped the foursome be more consistent in their placings. They practice dairy judging each Sunday night in the spring with the county 4-H team (which they are also a part of).

This same squad also competed in 4-H dairy quiz bowl to work on the knowledge needed for the 150-point written exam. After not winning any matches in 2014, they placed 2nd at the state 4-H contest this spring.

The team worked on reasons each Sunday morning (after chores) since September. Their reasons went from the 30s to the 40s. Their FFA advisor is more of a livestock and speaking coach, so he relies on assistance from those in the community with judging and oral reasons experience to aid in his students’ development.

As the number of farms continues to decline, the number of youth on farms also falls. This can be a particular challenge to find four youth with an active interest in dairy judging. And to compound the challenge, not all FFA advisors are proficient at dairy judging. But, by utilizing the talents of industry experts, FFA members can learn, grow in their knowledge, and reach their potential.

Congratulations to all teams competing this spring in CDE. You are on a path to learn and appreciate our industry. And hopefully your judging experience will have a positive outcome as well!