What can you learn while pushing up the feed? 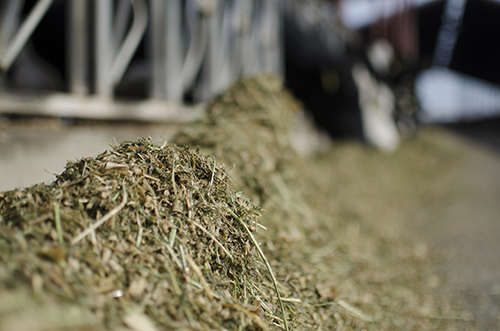 Those were some of my least favorite words to hear as child growing up on a small dairy. I hated having to go push up the feed by hand, especially during those hot summer afternoons.

Managing the feedbunk was a job that needed to be done multiple times throughout the day whether there be rain, shine, heat, or snow. But it was still one of those jobs that I never really enjoyed doing.

On our family farm, we used the latest and greatest technology to make sure that the cows had feed in front of them at all times.

It wasn't fancy, but it got the job done. It was cheap, it was efficient, and it was something that everyone could operate, including young children. As we got older, we had the ability to use the skid loader to help with this daily task, but the shovel always remained the most faithful tool.
While managing the feedbunk never became one of my favorite chores, I quickly began to better understand its significance as I grew up.

Without a properly maintained feedbunk, cows were less likely to maximize on their milk production. Not only was it crucial to make sure that there was always feed placed in front of the cows, but there were also other factors to consider when feeding.

As I grew to be more involved on the farm, I noticed several things during my time pushing up the feed. Timing played an important role when it came to feeding cattle. The cows always seemed eager to eat as soon as they left the parlor, so it was critical that feed was always in reach during that important time. Maintaining a consistent feeding schedule as well as ensuring proper feedbunk space made a large impact on the efficiency of our animals, too.

I had plenty of time to also check out the particle size of the TMR when I performed this daily chore. Some places had long stems of alfalfa while other spots were finely ground. This was an indicator that our feed wagon could use some new blades. Not only would this improve feed consistency, but it would also help to prevent feed sorting.

As much as I disliked the chore of shoveling up the heavy feed each day, I realized that there was a lot you could learn during that time at the feedbunk. I noticed where improvements could be made, and learned the importance of staying consistent. Are you managing your feedbunk correctly?

Taylor Leach grew up on her family's dairy farm in Linwood, Kansas. Leach graduated with an associate's degree from Kansas City Kansas Community College and now attends Oklahoma State University, majoring in animal science and agriculture communications. On campus, she is a member of the dairy club and also works on the university's dairy farm. Leach is serving as the 2016 Hoard's Dairyman summer editorial intern.
Related