So your cows don’t get heat stressed? 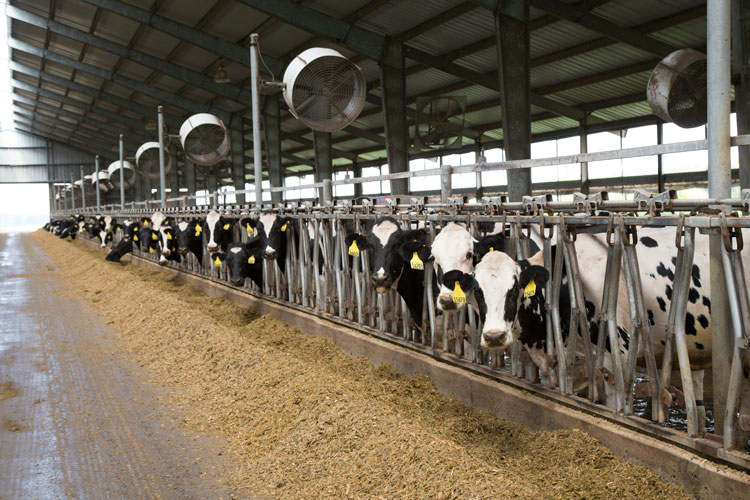 It has long been understood that heat stress is one of the biggest management challenges across the southern United States. More recently, research has indicated that even northern states are burdened by heat stress for several months of the year. If one factors in losses in milk production, reproduction, and overall health, heat stress has quite a hold on many dairies across the U.S.

The on-farm case study was conducted in a tunnel-ventilated 104-cow tie stall barn in Pennsylvania. The team monitored both temperature humidity index (THI) in the barn as well as rumination of the farm’s animals throughout the day. Tracked from July 7 to October 15, 2016, the cows experienced a maximum daily THI that ranged from 60 to 85 and a minimum THI that ranged from 46 to 75.

The analysis showed, as expected, that metabolic function suffered during periods with high THI values. The correlation can be easily seen in the model pictured below. When THI was high, rumination took a significant hit. The slow down of rumination that is indicative of lower dry matter intake and less metabolic function carries through to lower milk production.

In this data analysis, the difference in time that a cow spent ruminating at a 60 THI versus a THI of 85 was an impressive three hours. Think of the implications that has on milk production, reproduction, and overall health.

Think heat stress has a small impact on your farm? Think again.

Maggie Seiler
The author is an associate editor. She covers feeding and nutrition, youth activities and heads up the World Dairy Expo Supplement. Maggie was raised on a 150-cow dairy near Valley Center, Kansas, and graduated from Kansas State University with degrees in agricultural communications and animal sciences.
Related

For 58 years, she read every word in Hoard’s Dairyman
HD Notebook
Related to:
heat stress, HDN
In HD Notebook

Life is all about perspective
By Maggie Gilles, Associate Editor