The value of the written test 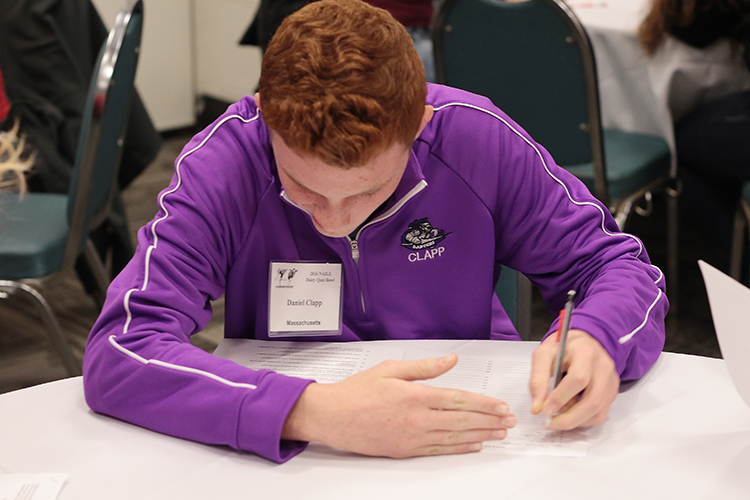 Some dairy bowlers like the idea of written exams. It is less pressure than the intense buzzer portion and often the exam is multiple choice – creating a higher likelihood of getting more questions correct. Additionally for organizers, it can be quickly scored. But, that is not the case at the national 4-H contest.

The national 4-H test is short answer, so lucky guessers better study, too! Because of the significant role of the test in this contest, the 50-point exam is not multiple choice and is hand-scored.

And why is the exam so important? It counts twice! 4-Hers take a written test to seed the teams, but those points also get counted in each and every round of the contest. Higher scores will earn easier match-ups.

During the live competition, states answer “team questions,” similar to bonus questions where there are multiple-part answers and the group can discuss their options. The point totals are announced for each team’s answers. This is the only time points are announced.

Next are the toss-up questions where youth use a signaling device (hand-held buzzer) to answer 20 questions. When three different teammates correctly answer a question, the team gets a bonus question and only that team can answer and earn points. It rewards a team for having balance among members’ knowledge.

All during the toss-up round, no scores are displayed, not on a chalkboard or easel. There is no strategy, other than answer as many correctly as you can. No points are lost for incorrect answers. The unknown factor is your test score from the night before gets added to your current round’s total. The value of correct questions (five different questions from each 4-Her for each round, valued at 5 points each) are added to your score.

That is where this national contest is different than many others I have worked. You do not know if they are going to pull your points from five questions you did well on, or five where you did poorly. And, it can vary significantly. When I coached a team at nationals, they got to add 100 points (the maximum) to their score in one round, but also could have added only 10 points if a different five questions were pulled. How does that translate? That 90-point swing equals six toss-up questions. And, that is a lot of points to make up if you are on the short end.

Here are the top 10 written test scores from the 2016 contest.

Enjoy the slide show of all 19 teams that competed in Louisville, Ky.

Make the most of your assets
HD Notebook
Related to:
HDN, dairy bowl, youth
In HD Notebook