Victory is sweet as Maple Fudge repeats in junior show. 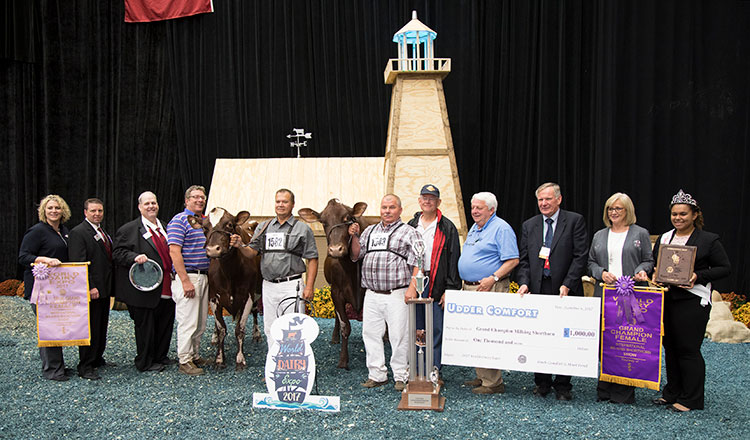 Selected as Senior and Reserve Grand Champion was Elron Megadeth Waveland-EXP-ET. She was the winning 5-year-old and was awarded Best Udder of Show for Iowa’s Halie Gruenwald.

KNH Endres Zeus Legendary ascended to the top of the Fall Calf class and was later named Junior Champion of both the open and junior shows for Wisconsin youth, Tyler Endres.

The winter yearling, Valley View Oakleigh 2390-EXP, was the Reserve Junior Champion of the junior show for Arkansas’ Jessica and Brittany Crawley.

Premier Breeder and Exhibitor banners were earned by Hard Core Farm, the Keith Fisher family from Pennsylvania. However, the Best Three Females Bred by Exhibitor class was topped by Elron Farms in Iowa.

Unique to the Milking Shorthorn Show, a Sportsmanship Trophy was presented to Cory and Kristen Salzl of Minnesota, and the Keith King Showmanship Award was presented to Missouri’s Shaelyn Scoon. 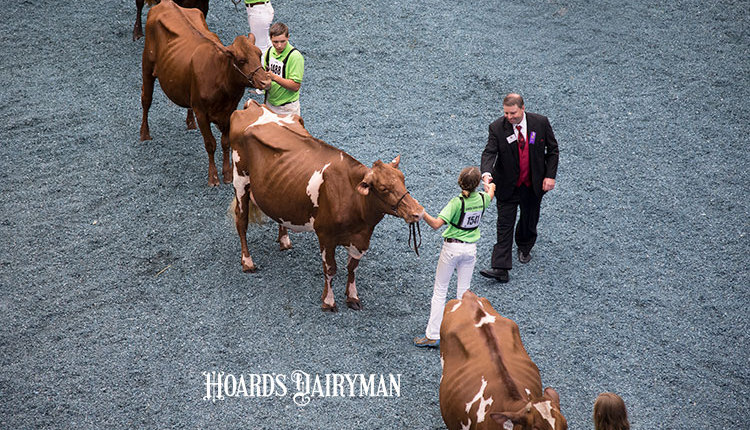 Maple Fudge Of 12 Oaks was named Intermediate and Grand Champion of the International Junior Milking Shorthorn Show, repeating this honor from last year. Maple Fudge is owned by siblings Colton and Ashley Brandel of Wisconsin. Ashley took the halter and led the junior 3-year-old to Grand Champion honors, as well as third in the very competitive open class.