By Hoard's Dairyman staff   @hoardsdairyman
At the Environmental Protection Agency's AgSTAR (http://www.epa.gov/agstar/) conference this week, we will hear from experts on the latest and greatest things happening with anaerobic digesters. Yesterday, we took a trip to Big Sky Dairy near Gooding, Idaho. The manure from 4,700 first-lactation cows goes to two digesters, then two gensets, to create an average of 1,200 kWh (kilowatt hours) per day. 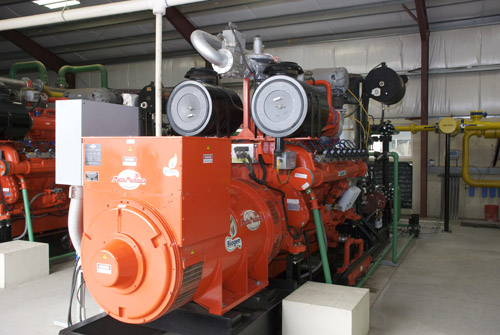 These identical gensets have run for nearly 20,000 hours.

This specific digester has outstanding stats in regard to its run time. Compared to their initial projections, it has produced 105 percent of the energy they thought they would. It has a run time of 97 percent, which basically allows time to change the oil (they change oil about every 550 hours). 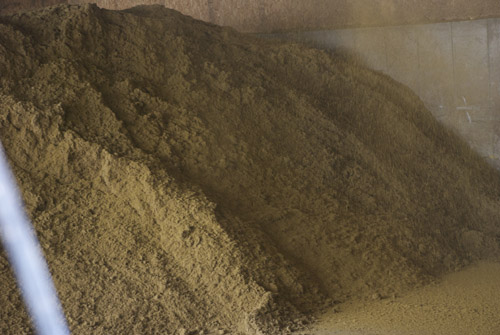 Utilizing the solids as bedding for Big Sky Dairy is essential to making their digester project profitable.

Big Sky also benefits from a great power sales rate – selling at 7.5 cents but buying back at 5.5 cents. Electricity is sent to the grid, fiber (separated solids) is used back in the barn and sent for horticultural uses, and the heat from the engines is used to heat the buildings and the digester itself. They run their digester at mesophilic temperatures (98 to 101° F). The 13 Wal-Mart stores in Idaho also started shipping their organic waste to the digester, though it only makes up about 1 percent of the total digester feedstock. Wal-Mart aims to be 100 percent renewable by 2020 (http://walmartstores.com/sustainability/) with zero waste. 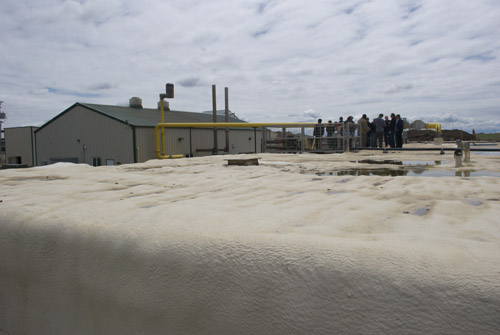 Two twin digester tanks hold 22 days' worth of manure - about 3 billion gallons. Inside the 16-foot insulated chamber is about 1.5 feet of gas at the top and solids on the bottom. The gas follows the yellow tube into the genset room.

After two years and 20,000 hours, it seems their digester is a model for large-scale farm electricity, fiber, and heat production. The project was off the ground with financing in a partnership between Dean Foods and AgPower Partners, LLC, (a partnership between Andgar Corporation, GHD, Inc., and Cenergy USA, Inc.) which also manages the digester. But project managers yesterday cautioned that digesters were not from plug-and-play. A representative from AgPower Partners said digester success is derived from the ability to capture the three co-products of digestion successfully. Those products are the gas (for electricity), the fiber (for ag or horticultural uses), and the heat.

In terms of dollars and sense, he put it another way: the power purchasing agreement (PPA – the long-term contract for electricity revenue) can help pay for your debt, the fiber can help cover digester engine operating costs, and the carbon credits and renewable energy credits will be your small profit. He estimated revenue to be 70 percent power, 20 percent fiber (often just selling solids back to the dairy), and 10 percent carbon credits. However, with the future of carbon credits being California's cap-and-trade system, carbon credit values should jump in 2012.

This all leads back to the question: is it worth it to build a digester? I don't know the answer because every case is different. Representatives yesterday cited 2,500 cows as a minimum build level. But here's what I do know: my initial head count yesterday showed more investors at this conference (many of whom had never visited a farm until yesterday) than farmers.

For more information, here's a full rundown of the week's events.

Welcome to my farmhouse
HD Notebook

The value of a good boss
HD Notebook
Related to:
HDN, energy
In HD Notebook

How we graze with robots

The lost art of communication
By Hoard's Dairyman staff