A herd owner and veterinarian talked about reproductive strategies that produce results on their farm. 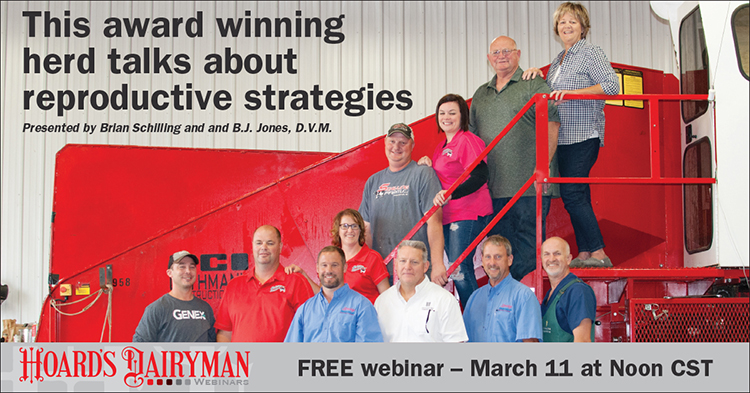 While some may want to continually raise the bar by tightening the reproductive window, Brian Schilling of Schilling Farms LLC, in Darlington, Wis., is doing some things a bit differently. He, along with the herd’s veterinarian, BJ Jones, D.V.M., presented “This award-winning herd talks about reproductive strategies” during the March Hoard’s Dairyman webinar.

Schilling Farms has won six Dairy Cattle Reproduction Council Platinum Awards – the most of any herd. Reproduction is of upmost importance – especially to Brian. He has carefully analyzed herd reports and his cows to determine optimal breeding strategies. It has paid dividends for this 600-cow herd, which produces over 32,000 pounds of milk, 4.02 percent fat, and 3.32 percent protein on three-times-a-day milking. The herd also had an ultra-low somatic cell count of 45,000 cells/ml.

While these results are impressive, moving forward Brian will be using less beef semen and upping the conventional semen usage. He no longer uses sexed semen. He simply has more heifer calves born now than he needs for herd inventory maintenance. His market for excess heifers as recipients has waned.

Calculating their cow data through DairyComp, the herd has a 74 percent heat detection rate, a 56 percent conception rate, and a 40 percent pregnancy rate. That means they find cows in heat, the cows conceive, and they maintain that pregnancy at a very high rate.

At calving, cows are given electrolytes and Inforce 3. They are also scheduled for temperature checks and beta-hydroxybuterate (BHBA) levels during the post-calving transition period. At Day 21, they are vaccinated with Bovi-Shield Gold 5L5 HB and Enviracor J5, as well as given prostaglandin. They are moved to the regular milking pens at approximately 30 days in milk.

Schilling Farms uses an Ovsynch program with a goal of a 90-day voluntary waiting period (VWP), and Brian looks to move to 100 days starting in April. That is correct, he wants to extend the VWP further, not lower it, as much research recommends.

Cows are pregnancy checked at 32 days and again at 59 to 66 days to diagnose twins and gender.

Other than the obvious practices Schilling Farms follows, it might be the little things that make a difference, too. The A.I. breedings are done by one company. Any cow with mastitis is not bred until she has been cleared. Cows open at 180 days in milk and not pregnant are put on a do-not-breed list (DNB). Brian also admits that his cows carry a bit more flesh on their moderate frames, with a goal of 3.5 to 3.7 body condition score at dry-off.

Heat abatement is also an important factor that Brian contributed to the herd’s reproductive success. “It was a big change,” Brian said as he talked about fans in the freestall barn, “We used to have fans down the middle stalls, but now we have fans on all the rows.” His veterinarian remarked, “The Schillings’ fans and soakers turn on before anyone else in the area.” The feed line soakers start at 67° and the fans kick on at 68°F. “We ramped up the holding area as well with fans and soakers, too,” Brian said. There are shade cloths for the outdoor feeding area for the dry cows.

“Cow comfort is a huge player. We made the stalls wider and deeper in the new freestall barn,” shared Brian. There is a correlation between lameness and reproduction, so cows walk through the footbath three times each week. He is also a stickler for stocking densities. He does not want more cows in a pen than stalls, which he repeated on multiple occasions.

Their heifers are also raised on the same location and are bred with conventional and sexed Holstein semen. The conception rate is 64 percent for conventional and 52 percent for sexed semen. Heifers are managed with outdoor headlocks and are put in the breeding pens at 12 to 13 months of age. Heifer pens are walked daily, and heifers are all bred on natural heats using Estrotect patches. They also are vaccinated with a modified-live vaccine of Bovi-Shield 30 days before breeding. Heifers are bred twice with sexed semen and once with conventional. If they are not pregnant after three services, they are not inseminated again. The heifers are also on a weekly pregnancy check rotation.

As far as sire selection, they look at Net Merit and the reproductive traits such as Daughter Pregnancy Rate (DPR) and Sire Conception Rate (SCR). A focus is also given to components and wellness traits. If looking at the herd from a genetic standpoint, the cows not only have high reproduction performance, but their genetics mirror their performance as they are higher than the industry average.

To gain additional insight into this herd’s reproductive management strategies, view the archived webinar. It includes a 45-minute presentation and questions from the live attendees. 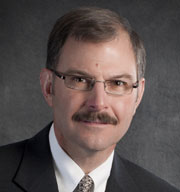 Milking is so routine that we sometimes fail to adequately analyze it. Using milk vacuum recorders, researchers found two common problems: biphasic milking and overmilking. The presentation will discuss the causes and impacts of these issues. Register at www.hoards.com/webinars.

Make the most of your assets
HD Notebook
Related to:
HDN, webinars, reproduction
In HD Notebook