Stinger was on point

The five-year-old cow from Vermont was named Grand Champion Ayrshire. 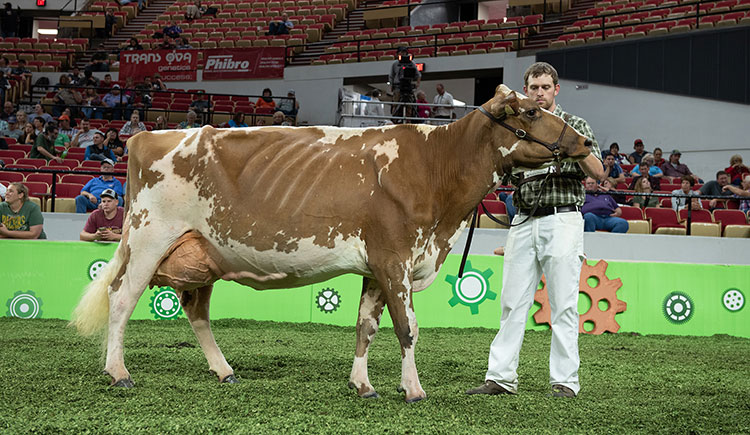 The Green Mountain State, Vermont, had a great day on the colored shavings, which were appropriately colored green this year. De La Plaine Bingo Stinger paraded to Senior and Grand Champion honors on the back of her dairyness and femininity. The five-year-old cow is owned by Blue Spruce Farm of Bridport. Reserve honors went to the 100,000-pound production cow Marilie Gentleman Karmina, owned by Peter Vail of New York and Mike and Linda Hellenbrand of Wisconsin.

Intermediate Champion was Old-Bankston JC Banner. This Junior Two-Year-Old Cow is owned by Maryland’s Glamourview-Iager and Walton. Another young cow, Old-N Lazy V Melania-ET, was tapped for reserve as a Senior Two-Year-Old owned by Blue Spruce Farm of Vermont.

Champions of the International Ayrshire Show

Intermediate Champion honors went to Reinholts Lochin Vail-ET. She is owned by Dalton, Dillon, and Breanne Freeman of Indiana. The winning Senior Two-Year-Old, Miss Bikini of Iowayside was reserve. Miss Bikini is owned by Dana and Madison Sickles and Jack and Sydney Carroll of Iowa.