Malt is the best of the best in Guernsey Show

The four-year-old Wisconsin cow checked all the right boxes to ascend to Grand Champion. 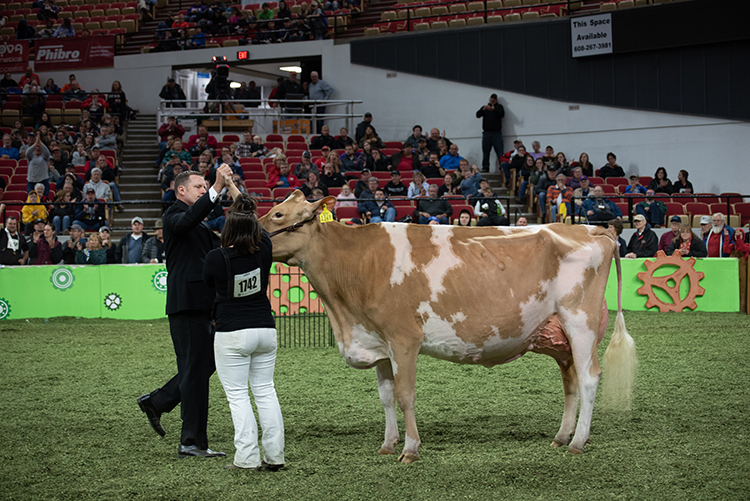 In the International Guernsey Show at World Dairy Expo on Friday, October 4, it was Valley Gem Atlas Malt-ET that was left in the center of the ring at the end of the show. The four-year-old cow was bred, owned, and exhibited by Valley Gem Farms of Cumberland, Wis.

“It’s so enjoyable when the winner walks in the ring and you know you have that winner,” shared Guernsey Judge Seth Johnson of Tunbridge, Vt. “When this four-year-old came in, we knew it. To me, the big thing about that four-year-old is that she is so comfortable on those feet and legs; she moves beautifully, she’s sure-footed, she moves beautifully on that pastern. She’s so balanced, and she’s so comfortable.”

And yet it was a close placing between the Senior Champion, Malt, and the Reserve Grand Champion and the 2018 defending Grand Champion, Willow Brook Labron Toni. She won the Six-Year-Old and Older Cow class that featured three returning Expo champions.

“This pair of cows — the four-year-old and this aged cow — are just lights out for us,” said Judge Johnson. “When this aged cow came in, that was a heck of a class, but we knew it as soon as we got behind her. Those two cows just rise to the top for me.”

In total, Johnson and his associate judge, Jon Lantz, Ellsworth, Wis., lined up 202 head of cows and heifers.