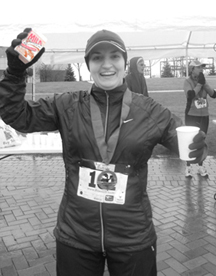 Once again, the Barnyard Clovers, a local 4-H club led by Jennifer and Jason Yurs, handed out low-fat chocolate and 2 percent milk to runners at the end of the race. In total, Dean Foods and National Dairy Shrine donated 300 half-pint milk cartons, 200 chocolate and 100 white.

With the continuing debate over chocolate milk in schools (see Wednesday's blog entry) and the health benefits it does (or does not) provide, you would think that most runners would opt for the 2 percent white milk option at the end of the race.

And you would be wrong.

A mere two hours after participants began crossing the finish line, to many runners disappointment, the volunteers were out of chocolate milk. The majority of the 2 percent milk remained untouched.

Runners receiving chocolate milk were ecstatic. Many walked away saying "This is the best thing ever," and "Thank you, what a great idea." These health-conscious individuals voluntarily chose to consume chocolate milk over regular milk. They also seemed to be well versed in the benefits of chocolate milk after rigorous exercise for an extended period of time.

"Our study indicates that chocolate milk is a strong alternative to some commercial recovery aids in helping athletes recover from strenuous, energy-depleting exercise," noted study co-author Joel M. Stager, PhD, professor of kinesiology at Indiana University. "Chocolate milk contains an optimal carbohydrate to protein ratio, which is critical for helping refuel tired muscles and build lean muscle after strenuous exercise and can enable athletes to exercise at a high intensity during subsequent workouts."

Researchers theorize that the combination of carbohydrates and protein found in chocolate milk is what helps enhance performance and suggest that flavored milk may be an optimal beverage for refueling muscles after exercise. The researchers also note that chocolate milk is a great-tasting and cost-effective alternative to many sports drinks.

In addition to its ideal combination of carbohydrates and protein, flavored milk contains seven other essential nutrients that are important for an athlete's health -- including bone-building calcium. No other sports drink contains the nutrient package found in flavored milk. According to the 2011 Dietary Guidelines and MyPlate recommendations, Americans 9 years and older, of all fitness levels should include at least three cups of low fat or fat free milk or milk products in their diet every day.

The runners had it right when they elected to drink low-fat chocolate milk after participating in the Half-Marathon.