By Hoard's Dairyman staff   @hoardsdairyman
In the dairy industry, we have our own version of the "Big 10" schools. These are the four-year universities charged with the task of generating some of the latest research and 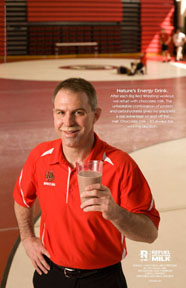 producing future industry leaders. But, while these schools excel at teaching their dairy students "Dairy 101," information about the benefits of milk and what we do as an industry is rarely passed down to the students who don't sit in their classrooms daily.

Cornell University's College of Agriculture and Life Sciences (CALS) has begun to tackle the information gap present on campus. In early April, CALS and Cornell Dining launched their own version of the "Got Milk?" campaign. Posters began sprouting up around campus showcasing notable Cornellians sporting a milk mustache.

The University began the campaign as a way to promote the nutritional value of milk and Cornell's central role in local, state, and national dairy industries.

After partnering with CALS Communications and receiving permission from the national "Got Milk?" campaign, the first poster was printed. Alongside the face of University President, David Skorton, it emphasizes the cognitive benefits of drinking milk and features the statement: "Packed with high-quality protein and B vitamins, it's like liquid brainpower." 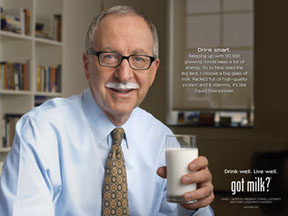 According to Michele Wilbur, a Cornell Dining nutritionist, B vitamins help keep energy levels high and also help the body combat stress. "It really is like nature's energy drink," she said.

Additional posters have and will continue promoting other nutritional aspects of milk, such as its calcium, vitamin D, and phosphorous, while featuring some of Cornell's most recognizable personalities. To date, the Dean of CALS, Kathryn Boor, and CU Wrestling coach, Rob Koll, have been featured on the posters. 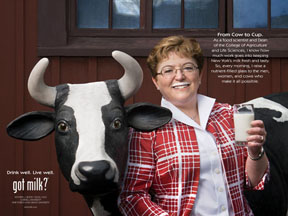 As for future participants, you'll have to stay tuned. Organizers are keeping on the down low, noting that the student's speculation is helping generate the desired interest in the campaign.

But they don't deny that a Big Red athlete might get involved. After all, scientific research supports low-fat chocolate milk as one of the "quickest, easiest, and best recovery food for athletes," said Wilbur. It is not only chock-full of carbohydrates and electrolytes, but also includes essential amino acids and the added bonus of protein that is not found in most artificial recovery drinks, she said.

"The 'Got Milk?' campaign is a great way to show our support for our land-grant mission; to reach out and share knowledge with the public," Jason Huck, general manager of the Cornell Dairy added.

For more information, check out Cornell Got Milk-Mustache Celebrities on Facebook.