Dairy farmers easily get their 3-a-day, but not everyone can drink milk. 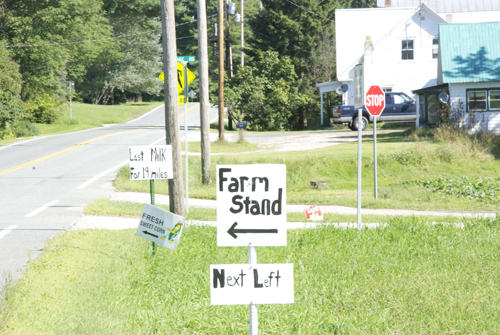 Traveling through the badlands of South Dakota, the deserts of the Southwest, and many other desolate areas of this country, "Last gas for X miles" signs let us know how important our fill up might be.

In Vermont, a state that celebrates and economically depends on its dairy farm heritage, milk may seem like a commodity. As we traveled along the scenic routes in mountain valleys yesterday, this sign reminded us that milk simply is not essential for everyone. Even in Vermont, the state of Cabot cheese, Ben and Jerry's ice cream, and the Holstein Association headquarters, there is a noticeable percentage of the population that does not consume dairy products or animal products in general.

Milk's human market penetration
A 2009 USA Today article compared milk to many other common allergens. Just less than 40 percent of the world can digest lactose after childhood. By ethnic group, estimations say 0 percent of Native Americans, 5 percent of Asians, 25 percent of Africans and Caribbean peoples, 50 percent of Mediterranean peoples, and 90 percent of northern Europeans have bodies that continue lactase production throughout their life.

Tonight, after you count all your normal blessings, also realize that a gene mutation 7,500 years ago is the reason human adults can drink cows' milk, according to this Scientific American article. Lactase persistence (which provides the ability to drink milk) is thought to have developed in Northern Europe.

Any dairy bowl amateur realizes that Northern Europe is exactly where our main U.S. breeds started out. The original theory says that the lack of sunlight (and thus our bodies' Vitamin D production) helped people find the Vitamin D rich milk, literally allowing them to survive.

But the above article notes two other theories. Lactase persistence may have actually started as result of starvation and parasitic water or drinking games (of milk). The first, says the author, is a result of boom and bust patterns of crops as Europeans moved westward. With parasitic water all around, animals were the only consistently pure source of food.

The drinking games theory is similar to today's Fear Factor show. Men may have sat around drinking as much milk as they could before getting sick. Eventually, the guy who could drink as much milk as he wanted would win, and his genes would be passed on to the next generation.

Our promotion programs aim to move us toward everyone drinking milk. Realistically though, as the U.S. and world populations change, we won't have a chance (at least for fluid milk) to get everyone to drink milk. Keep this in mind as we continue to grow demand for our (potentially life-saving) product.

For even more information on milk's historical timeline, click here to check out the data provided by ProCon.org.
Related