John Erbsen was in the middle of it all. 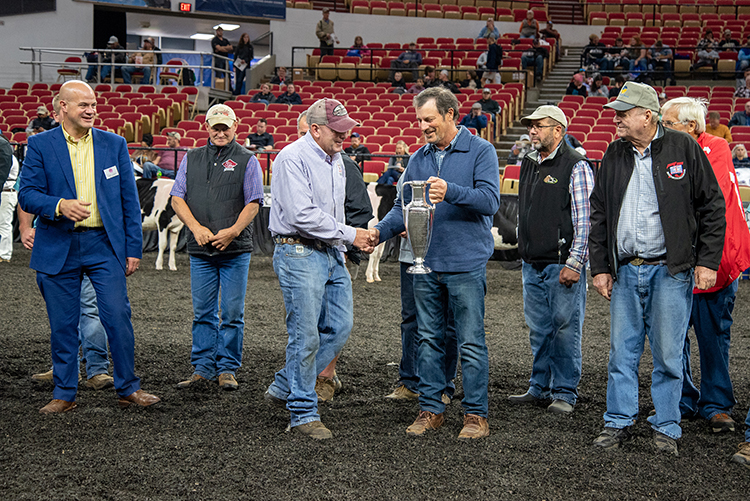 John Erbsen of Lanark, Illinois, was presented the 80th Klussendorf Award, the highest recognition given to a dairy cattle showman in the United States during the 55th World Dairy Expo. Erbsen embodies every great quality of a great dairyman.

The award is given in memory of Arthur B. Klussendorf, considered an outstanding showman of his time and a model for all those who have followed him. This year’s selection was made by members of the Klussendorf Memorial Association, which was formed in 1937, at its annual meeting held earlier this week in Madison, Wis. Erbsen received the silver trophy designed by Tiffany Jewelers of New York City.

Erbsen is among the most unique individuals to ever win the award. He continues to have a highly successful career in the A.I. industry as a dairy programs specialist and he has captured outstanding cattle images as a professional photographer. Both vocations span over three decades. 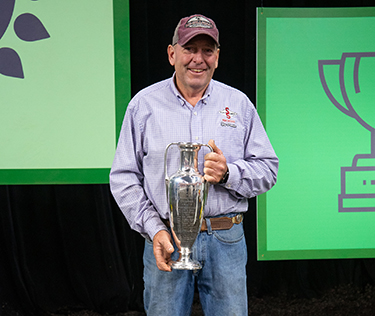 As good as this Illinois native is in those spaces, it’s his cow sense that ultimately led fellow Klussendorf Association members to select this individual as the 80th winner of North America’s most coveted show award. Having developed a friendship with the Kamps Family of Kamps-Hollow, he also became a big fan of Kamps-Hollow Altitude. Because of his suggestion to Select Sires, KHW Kite Advent-Red entered A.I. service and made a tremendous impact throughout Red and White Holsteins. It’s at this time that Erbsen also negotiated a purchase of Advent’s sister KHW Regiment Apple-Red and owned her with several partners throughout the years. Today, we simply know this cow as “Apple” as she has transformed the Red and White breed.

The Apple legacy unfolded when she won the Junior Two-Year-Old class at the Holstein Show. Five years later, Apple ascended to become the Grand Champion at the International Red & White Show. Then, in 2013, one of the unique moments in World Dairy Expo annals took place — Apple’s clone, Apple 3, was named Grand Champion. Apple, herself, was named Reserve Grand Champion, and Apple’s daughter earned honorable mention honors that year. Fast-forward to this year, Apple was named the All-Time Red and White World Champion by Holstein International magazine.

The next chapter of Erbsen’s incredible story began to unfold in 2013 when he invested in Apple’s six-month-old daughter, Miss Apple Snapple. Two years later, Snapple also won the Junior Two-Year-Old class at World Dairy Expo. Prior to that moment in time, Snapple was flushed and one of her calves was named Erbacres Snapple Shakira-ET. Shakira eventually ascended to the pinnacle of World Dairy Expo stardom when she was named Supreme Champion of the entire show for her new owners in 2021. While many great people contributed to the success of these great cows, John Erbsen was in the middle of it all.

Footloose danced to the top of the Holstein show
By Corey Geiger, Managing Editor