Class III average was $18.37 per hundredweight

Unfortunately, record milk prices coincided with record feed prices. Talk about a "glass half-full versus half-empty" situation. Even though feed took the fun out of $18 milk, thank goodness the two price spikes happened together. Imagine the disaster if they hadn't. 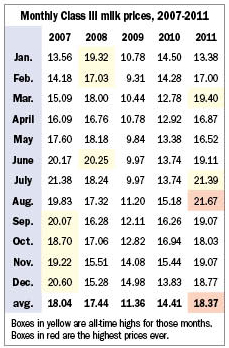 A new record is nice, but let's be frank: Never has so much amounted to so little for so many. And in order for producers to stay profitable and continue recovering from 2009, how soon does a new record need to be set?

Eighteen-dollar milk just doesn't go very far these days. Efficiency improves by inches, not miles. Costs per head are cut by cents, not dollars. Belts eventually run out of holes to tighten. But cows always have to be fed, and that demands cash.

Many input costs look like they will be a bit lower this year. Diesel already is. Hay is forecast to be. Corn might. Let's hope it doesn't take $18 milk to cover everything because right now Class III futures for 2012 average out about $1 less than last year.

I am one biased farmer
HD Notebook
Related to:
HDN, milk prices
In HD Notebook