Hay is crazy, calf prices are upside-down, and futures prices are scary.

By Hoard's Dairyman staff   @hoardsdairyman
We've talked to quite a few Western dairy producers in the last four weeks, and what they've told us paints a picture that is filled with concern.

Hay prices are still crazy. Widespread hopes that they would decline in 2012 have been dreams of fantasy so far this year. Producers in southern California and Arizona, for instance, are still paying $300 per ton or more. Prices may ease as the new crop begins to hit the market, but there's great uncertainty about how big supplies will be.

Calf prices have turned upside-down. Remember when day-old Holstein bull calves were worth $5 to $10 each? It wasn't so long ago. Wow, has that changed. Central California dairy owners say they're getting $200 to $225 now, and reports from other Western states are around $175. Meanwhile, heifer calf prices have collapsed and are even lower than bull calves. Much lower, in fact. Producers in several states say they're only bringing about half of what bulls are.

Futures prices are scary. All across the West, the biggest concern is the sharp downturn in milk price futures since January. (See chart.) Each daily report from the Chicago Mercantile Exchange lists Class III milk prices that extend 12 months into the future. Each bar in the chart shows what those prices averaged on the 7th day of the month (or close to it) for the last six months. As you can see, the trend isn't good. 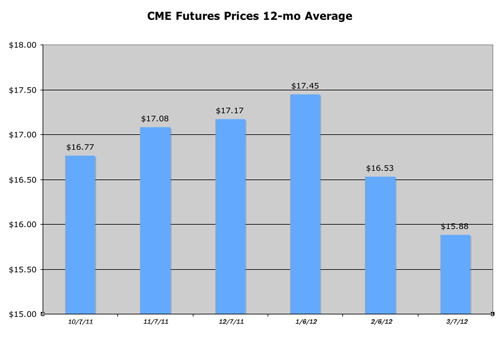 What we're hearing is the total cost of milk production is around $16.50 per hundredweight. That means things were looking good in January. But futures prices have dropped hard since then, and continued strong production levels give little hope for much recovery anytime soon.
Related