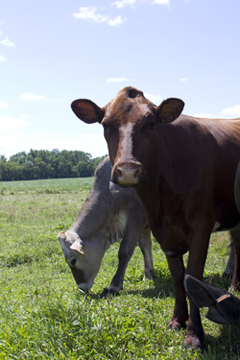 While it had been predicted for much of the summer, high feed costs have now taken its toll on national milk production. Overall, September milk production fell 0.5 percent when compared to the same time last year. Much of the decline came from Western states which buy a lion share of their feed. As a point of reference, the last time we had a reduction in monthly milk production was in January 2010.

In California, milk flow fell 3.9 percent due entirely to reduced output per cow - 2.5 pounds per day to be exact. The number of cows within the state rose by 3,000 head, growing to 1.779 million.

Other Western states that reduced production included: Arizona, down 5.4 percent; Texas, down 4.7 percent; New Mexico, down 4.5 percent; and Washington, down 1.9 percent. Both Utah and Oregon held steady compared to last September. Bucking those downward trends in the West were: Idaho which grew by 2.3 percent and Colorado, up 5.2 percent.

While purchased feed costs have hit all dairy producers, the pain has been sharper in the West. Latest USDA estimates show that California, Idaho and Washington dairy producers bought three-quarters of their feed supplies. That along with the cost of freight has shrunk margins.

On the flip side, producers in Wisconsin which grow two-thirds of their feed have been somewhat insulated from rising costs. In the Badger State, cow numbers rose by 7,000 compared to last year, while milk per cow climbed over 1 pound per cow to boost the state's September production by 2.9 percent.

Since April, cow numbers have declined by 76,000 head nationally. September accounted for nearly one-third of the drop-off with 27,000 fewer head. While there was some year-over-year variation in the top 23 dairy states, most of the losses came from the 27 smallest dairy states as the leading dairy states added 5,000 cows. That means the other 27 states, which account for less than 10 percent of the national dairy herd, shipped some 32,000 cows.
Related