Pregnant cows contribute substantially more estrogens than any other source on the dairy farm.

The October 25, 2012, editorial, "Hormones could become part of nutrient plans," on page 690, requires a response. The column describes a joint research project published in the journal Environmental Science and Technology which reports that three commonly found estrogenic hormones remained in solution 52 days after being exposed to 95°F lagoon water temperatures. The researchers concluded that anaerobic environments greatly slow or prevent breakdown of these estrogenic hormones possibly leading to an accumulation of these hormones in manure lagoons over time. This is clearly an important finding. Our issue is not with the published research itself but with the context within which this research was framed. 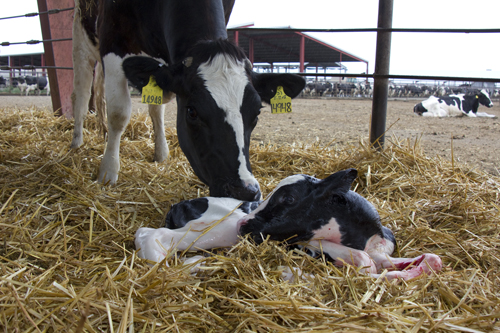 The ovsynch protocol uses two hormones to synchronize ovarian function in dairy cattle. Gonadotropin-releasing hormone (GnRH) is a peptide hormone that induces an LH surge from the anterior pituitary and controls follicular development. Prostaglandin or PGF induces luteolysis in cattle, thereby controlling function of the corpus luteum. Both GnRH and PGF are exact or near-exact copies of the hormones produced by the cow herself. Furthermore, GnRH and PGF are rapidly metabolized after administration. Thus, their active forms are not detectable in meat, milk, urine or feces. It is important to note that estrogens are not given to cows in any of the hormonal synchronization protocols that have been adopted by U.S. dairy producers.

The error in logic in the editorial occurs because we use the broad category "hormone" to classify both the reproductive hormones used in the ovsynch protocol as well as the estrogenic compounds found in manure lagoons. This results in a logical fallacy known as false equivalence. A common way for this fallacy to be perpetuated is when one shared trait (i.e., the term hormone) between two subjects (i.e., the hormones used in the ovsynch protocol and estrogenic hormones in manure lagoons) is assumed to show equivalence when equivalence is not necessarily the logical result.

Hormones comprise a broad category of compounds that are secreted by an organism into circulating blood by ductless glands and act on target tissues in another part of the body. Reproductive hormones can be further classified based on their structure and chemistry as steroids (estrogen and progesterone), glycoproteins (FSH and LH), peptides (GnRH) and prostaglandins (PGF). Thus, when we talk about hormones, we need to be specific about which class of hormones. All hormones do not have the same biological action or environmental impact. Reproductive hormones are required for normal reproduction in all livestock species and in all livestock operations, including organic, grazing or intensively-managed operations.

We have worked for many years to develop and refine the hormonal synchronization protocols such as ovsynch that have been adopted by the dairy industry to improve reproductive management of dairy cattle. Linking the ovsynch protocol with the issue of estrogenic compounds found in manure lagoons isn't logical and needs to be clarified. While we appreciate the editors' desire to begin the discussion of whether hormones such as estrogens could one day be included in nutrient management plans, we all need to insist that science and common sense be the key drivers of this discussion.
Related

The butter board bandwagon
comments powered by Disqus