By Corey Geiger, Managing Editor
Winning the All American Jersey Show at the North American International Livestock Show was Cascadia Iatola Puzzle owned by Gene Iager who lives in Maryland. Puzzle also won the show's best udder award. Puzzle was the Intermediate Champion and winning senior 3-year-old. Taking the Reserve Grand Champion award was WF Attaboy Tiffany owned by Waverly Farms, Zachary Stiles of Clear Brook, Va. Tiffany won the 5-year-old class and she was the show's Champion bred and owned. Those two cows are shown in the photo closest to the front and third from front. 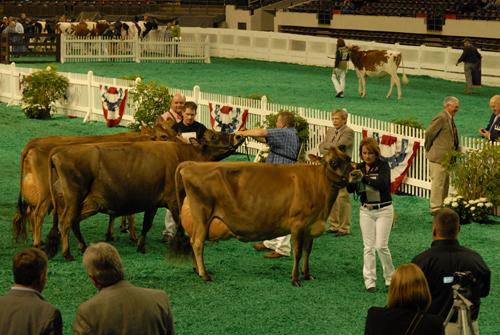 On Sunday, KCJF Tracer Ritzy, Brady Core, Salvisa, Ky., won the 59th Jersey Jug. On Monday, she was named Honorable Mention Intermediate Champion. The Max Gordon Recognition Award went to Norman Nabholz, West Union, Iowa. The 2012 National Queen for the upcoming year is Jessica Smith, Picayune, Miss. The 60th All American Jersey Sale averaged $7,086 on 53 lots. It was the second highest average in the history of the sale.

The American Jersey Cattle Association reported there were 392 head checked in for the Jersey show at the North American International Livestock Show. In contrast, there were 353 head that made their way through the ring at World Dairy Expo's Jersey show. For a complete listing of the winners in the cow classes, with photos, be sure to check out our Facebook page.

Sustainability talking points in your back pocket
HD Notebook
Related to:
HDN, NAILE
In HD Notebook