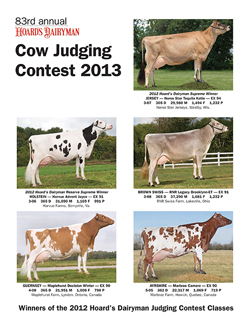 Our January 10, 2013 issue kicks off our annual cow judging contest which runs through the March 10 edition. This year's classes will include Brown Swiss, Holstein, Red and Whites, Ayrshire and Jersey cows.

Even though the contest is on the cover of the first five issues, you don't have to wait for all five magazines to reach your mailbox to complete your entries. Free reprints are available to 4-H clubs, FFA chapters, junior breed organizations, college or tech school judging teams or even an ag-related board of directors by calling us at 920-563-5551 or email judging@hoards.com. When emailing, please give us your U.S. postal address, organization name and number of reprints. In exchange, we ask that you submit entries once every two years to remain on the free mailing list. (Hoard's Dairyman does not sell or rent its subscriber database).

We want to thank our readers for their continued interest in our contest. Last year, we received over 20,500 entries from readers in all 50 states and eight countries. Of the 20,500 entries, 75 percent or 15,500 came from young people age ages 8 to 18.

Each year, we always receive a number of questions about the contest. We will answer a few of them in this blog. If you have other questions, please send them to us by emailing judging@hoards.com.

When are pictures taken?
We select contest classes almost two years in advance to give breeders enough time to get their best cows photographed. Plus it is difficult to get all of the pictures taken the same day. Remember, three different views must be taken for each cow. In addition, we often take one or two extra cows to make sure the class will be placeable. We then select the best four cows to represent the farm and the breed, yet make a somewhat placeable contest class.

Why aren't all seven breeds in each contest?
Due to our rigorous contest timeline, we cannot add a sixth or seventh class. However, we do rotate some of the smaller breeds that are members of the Purebred Dairy Cattle Association (PDCA). All contests feature Holsteins, Jersey and Brown Swiss while the other four breeds rotate.

What are the odds of a perfect score?
Let's just say you may have better odds of winning the lottery. Consider this: There are 24 ways to place each class and there are five classes of cows. The mathematical odds of getting all that to work in your favor is only 1 out of 7,962,624. However, our readers have done better than the odds. Of the 5.5 million contest entries we received since 1931, there have been 79 perfect scores. The winners are recognized in the May 10 issue each year.

Remember, entries must be postmarked by Thursday, March 21, 2013.
Related

Where is the sweet spot?
By Corey Geiger, Managing Editor