Vilsack continues to lead in 2013

Agriculture Secretary Vilsack confirmed that he had accepted the challenge of continuing as Secretary of Agriculture for another term. 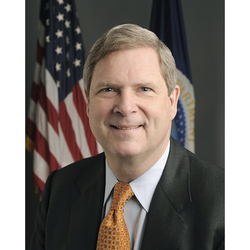 With one change, the five people that have their hands full of farm policy will look very similar in 2013-2014 to 2011-2012. Yesterday, Secretary Vilsack spoke before the American Farm Bureau Federation's national convention in Nashville, Tenn., letting attendees know he was staying on with President Obama for the next term.

Rueters reports that Vilsack told attendees we needed to move forward with a new five-year farm bill. One big reason for the new bill would be cutting the $5 billion a year in direct payments and in turn focus on the crop insurance program. Otherwise, the direct payments could be a big target for cuts in coming months.

Because we had no changes in the Upper and Lower House majorities, leaders in the Senate and House agriculture committees will look familiar. With Democrats still leading the Senate, Debbie Stabenow of Michigan will continue on as chairwoman of the Senate's Agriculture, Nutrition and Forestry Committee. On the House side, Frank Lucas (R – Okla.) and Collin Peterson (D – Minn.) will continue as chair and ranking member, respectively.

One big change
Last session's Republican ranking member, Pat Roberts of Kansas, will be pushed out by Thad Cochran of Mississippi. This big change comes as result of rules at the Senate Appropriations Committee and creates a small game of musical chairs. Cochran has served in the Republicans' leading role in the Appropriations Committee since 2005. He served as chair from 2005 to 2007, and has since served as ranking member when Democrats took over the majority.

With six years served as ranking member, Senate rules call for Cochran to have reached his limit of service in the Republican's top position on a committee. This means he can return to the agriculture committee, where he served as chair from 2003 to 2005, and take the role of ranking member.

This move pushes current ranking member, Pat Roberts, to take his seniority back on the Senate Rules Committee.

While this might all seem like political shenanigans, and it is, it may mean changes for the proposed five-year farm bill. Southern crop growers suddenly have a new voice in power. Crops grown in Kansas are certainly different than those grown in Mississippi, so what the change means for other portions of the country is unclear at this time, but will be sometime to watch in this Congress.
Related