Herd size and production have soared; farm numbers have plummeted.

By Dennis Halladay, Western Editor
Change is one of the great constants in U.S. dairy farming.

The industry has been evolving for most of a century, but especially in the last 20 years. Like an ice skater who draws in their arms while spinning, the speed has increased as it becomes smaller and smaller. 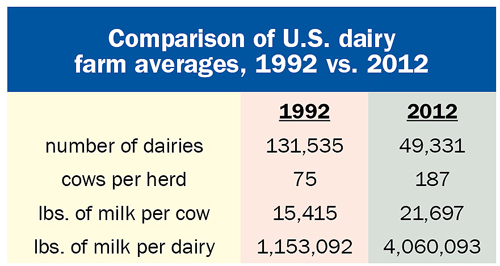 More cows making more milk has forced profound change upon dairy farms in ways that may not come to mind right away. For instance, in 1992 the average dairy produced 1.15 million pounds of milk. In 2012 the average was 4.06 million pounds. So what?

Then comes the additional capacity that is needed to milk those additional cows and cool and store that additional milk. And what about extra employees? Two and one-half times more is unlikely, but some additional help is a must - help that is much scarcer than it was 20 years ago.

The most profound change, however, is probably in feeding. Producing three and one-half times more milk per year requires an enormous amount of additional feed, feed storage, feeding time and feeding attention. For those who grow their own feed, it means needing more land to farm, more equipment and more manpower to do the work. For those who buy feed it means being even more at the mercy of milk and feed price volatility.

More change in the future is a certainty; how producers cope with it is the question.
Related