Avoid overstocking in the transition period

By Hoard's Dairyman staff   @hoardsdairyman
The majority of work exploring the consequences of overstocking has focused on the behavioral changes associated with reductions in space allowance. However, more recent work is beginning to show that overstocking boosts a cow's risk for health problems, low milk yield and poor reproductive performance.
In our blog on May 9 (www.hoards.com/blog_cow-feeding-space), we shared data from the first half of Julie Huzzey's presentation on overcrowding and feeding behaviors from the Tri-State Dairy Nutrition Conference. In that talk, Huzzey, at the University of British Columbia, went on to detail the consequences of overstocking on health parameters.

Chronic stress has the potential to alter a cow's energy metabolism. When a glucose tolerance test was administered during periods of overstocking, transition cows had a slower rate of glucose clearance. The cows secreted less insulin than in the control period, which compromised nutrient metabolism and elevated their risk for metabolic disorders.

Blood and fecal samples were collected during both treatments to measure biomarkers of energy balance and stress.

Despite a higher intake, average NEFA (non-esterified fatty acid) and glucose concentrations were also higher. The changes in the way glucose is metabolized in the body could explain the higher NEFA and glucose levels in the blood despite higher intakes. 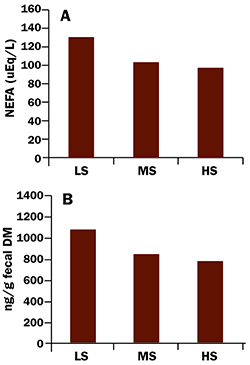 Low-success (LS in the figure) cows, or those that tended to be displaced more than they displaced other herdmates, had the highest concentration of fecal cortisol metabolites and plasma NEFA. These animals also had a tendency to be in their first lactation.

Avoiding overstocking during times when cows are particularly vulnerable, such as the transition period, is a key step to maximizing health, welfare and ultimately farm income. Elevated NEFA concentrations in the weeks around calving (above 0.3 mEq/L in the two weeks prior to calving) have been associated with a higher risk of disease and reproduction problems.

Make the most of your assets
By Hoard's Dairyman staff