A new venture has its roots in the 1800s 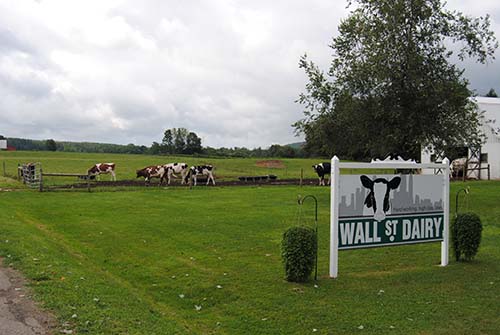 Wall St. Dairy hosted Red and White breeders as part of the national convention's day of tours in Chautauqua County, N.Y. It was the first stop for the group; a farm rich in history that is balancing modern technologies while keeping with tradition.

The farm that is now Wall St. Dairy was first established as a turkey farm in 1840. It was home to 10,000 turkeys each year. Current owners Jeff Winton and Jim Modica, who work in the pharmaceutical and health care industries, respectively, purchased the farm in 2007. Winton was raised on a commercial Holstein farm in Chautauqua County, which is still operated by his brothers, nieces and nephews.

Winton wanted to get back into the industry, as farming has always been in his blood, so he and Modica began making Wall St. cow friendly. Since most buildings were built in the 1800s, they are slowly fixing them and the home that sits on the property. They put new stalls in a pre-existing milking barn and have built a new calf barn. In addition, they have a replacement heifer farm offsite and are currently building a new pack barn. Along with the renovations, Wall St. also has plans to build a creamery and make farmstead cheese. Wall St. Dairy was a registered Guernsey farm for a few years, but sold their cows to their former herd manager and purchased the Spring Fed herd in 2009. This became the foundation for their current registered Holstein herd, many of which are Red and White carriers. Three-fourths of the animals go back to Spring-Fed Shark Attack 4E-93, who is 14 years old and enjoying retirement at Wall St. Dairy. The herd now stands at 49 mostly young cows, with plans to expand to about 80 once the new barn is finished.

Agricultural lessons from around the world
By Taylor Pires