Last direct Hoard relative to work for the company passes away

By Corey Geiger, Managing Editor
For over 40 years, Mark "Bud" Kerschensteiner diligently worked for the company that his great grandfather, Governor William Dempster Hoard, founded in 1870. With his passing, an era comes to a close, as Kerschensteiner was the last direct relative to work for Hoard's Dairyman and the W.D. Hoard and Sons Company. Shown in the photo are: Mark "Bud" Kerschensteiner (right) with Verna and Jim Baird (retired Hoard's Dairyman art director) at the 2006 open house following National Dairy Shrine's latest renovation. 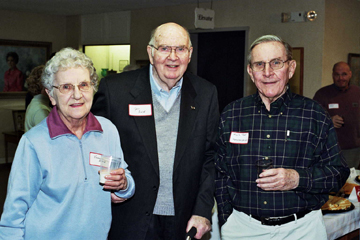 Kerschensteiner's career with W.D. Hoard and Sons Company began on December 1, 1945, after two years of service in the U.S. Marine Corps where he was deployed to the Pacific Theatre during World War II and was stationed in Guam and Okinawa. His employment with the company began with his service as advertising manager for the Jefferson County Union. In June 1953, Kerschensteiner became an advertising representative for Hoard's Dairyman and a decade later he was promoted to advertising manager. It was a position he held until his retirement in 1986 when Gary Vorpahl succeeded him in that role. At the time of Kerschensteiner's retirement, he also was senior vice-president and director of the American Agriculturalist, Inc., a Hoard company affiliate in Ithaca, N.Y. During his career, he led the application effort to have the historic Hoard's Dairyman Farm placed on the National Register of Historic Places by the United States Department of Interior.

In his local community, Kerschensteiner was the prime mover in the formation of the Fort Atkinson Community Foundation, Inc., founded in 1973. The foundation which began with Kerschensteiner's vision and a $25,000 gift from the late Mary C. Hoard, has grown to current assets of $18.6 million. Kerschensteiner led the group as the first board president for eight years. At the time of its inception, the Fort Atkinson Community Foundation was only the fourth one of its kind in the state with Milwaukee, Racine, and Oshkosh, all considerably larger than Fort Atkinson, having already established foundations.

Sustainability talking points in your back pocket
HD Notebook
Related to:
HDN, history
In HD Notebook