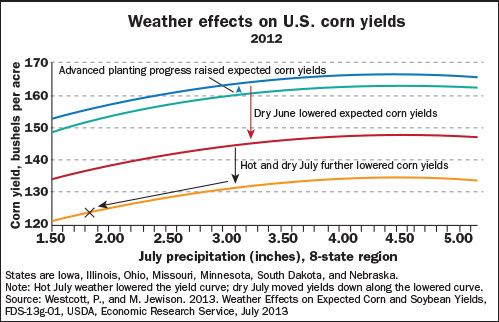 The corn crop remains uncertain in 2013, as a wet spring gave way to an abnormally dry summer for major corn and soybean states. July and August could turn out to be the driest years since 1936 for Illinois, Indiana and Iowa.

The late growing-season drought intensified in Iowa and neighboring states in the week ending September 3, noted the National Drought Mitigation Center. The portion of the U.S. corn production area in drought rose from 45 to 52 percent last week.

Last year's drought was the worst since the 1930s, with the USDA declaring 2,245 of the nation's counties disaster areas. Geographically, this area covered 39 states and 71 percent of the U.S. Corn yields were at the lowest levels since 1995. The chart illustrates the impacts of drought and hot weather on yields.