By Temple Grandin
The author is a professor of animal science at Colorado State University, Fort Collins, Colo.

People have known for a long time that rough handling and stress is detrimental to dairy cattle. Over 100 years ago, W. D. Hoard, founder of Hoard's Dairyman, wrote that people working with dairy cows should have patience and kindness. He knew that rough treatment lessened the flow of milk. Jack Albright, professor emeritus at Purdue University, likewise stated that tame dairy cows willing to approach people will give more milk. Despite these well-known facts, people have forgotten Hoard's and Albright's message. 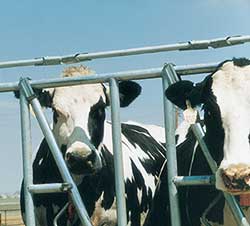 Over time, researchers have used statistical methods to document the damaging effects rough handling causes. In fact, shocking a cow or hitting her can reduce milk yield by 10 percent. Cows that are fearful of people are less productive, documents Australian Paul Hemsworth. Fearfulness was determined by the degree of restlessness the cow displayed when a person was close to her during milking. Cows that avoided people and became restless when a person was nearby had lower milk production. Still further, observations at a large dairy indicated that tame cows gave more milk. Acclimating heifers to people in this pen may help them to grow up into calmer, more productive cows.
Fear memory formation . . .
What makes a cow fearful of people? Animals have excellent memories for both good and bad experiences. Research on the brain by Joseph LeDoux at New York University shows that animals can experience fear memories that cannot be erased. These fear memories are located in a part of the brain called the amygdala which is the lower more primitive part of the brain under the cortex.

Fear memories are permanent. Back in the times when cows were wild animals, they would be more likely to be eaten by predators if they forgot where they had encountered a lion. Over time, animals can learn to override a fear memory and become less fearful of the place where a scary experience occurred. But they can only override the fear memory it can never be erased. The emphasis has to be on preventing fear memories.

Cows and other animals tend to develop fear memories which are linked to either bad places or prominent objects. Animals are most likely to become fearful of a specific place or of a person wearing a certain type of clothing associated with a painful or scary experience.
Cows do not recognize human faces; they recognize places, smells, voices, distinctive clothing, and certain objects.
It would be very detrimental for milk production if a cow becomes afraid of the milking parlor. It is essential that a heifer's first experience in the milking parlor is a good experience. First experiences make a big impression on animals. If a heifer falls down or is shocked with an electric prod the first time she enters the parlor, she may develop a fear memory that is associated with the parlor.

Research done with rats shows the powerful effects of forming a fear memory. Rats were placed in a maze and allowed to explore all the alleys. If a rat was given a shock the first time it entered a new alley, it would never enter that alley again. However, if the rat entered the alley several times and found food, that produced a positive memory. If it received a shock after the fifth time it entered, and still received food, the rat would be likely to continue to enter the alley.

If an animal has a painful or scary experience the first time it enters a new place, then the fear memory is associated with the new place. But, if a painful or scary event happens in a familiar place which has previously been safe, the cow will most likely associate it with some other thing such as a person wearing a yellow raincoat. The fear memory will be associated with the raincoat instead of the place. The fear memory can resurface in any place the cow sees a yellow raincoat.

Introducing heifers to the parlor . . .
Care must be taken to ensure that nothing bad happens to a new heifer when she first walks through the parlor. Animals are naturally wary of new places. If a new experience is suddenly shoved in the animal's face, it is more likely to be fearful. One of the best low-stress ways to introduce a new place is to allow animals to voluntarily explore it. In smaller dairies, heifers could be allowed to explore and walk around in the parlor before they freshen. In a large dairy, this would probably not be practical.

French researchers have found that young calves which are handled frequently by people (and have positive experiences with people) will grow up into calmer cows with a smaller flight distance.

On a large dairy, a person could be hired to pet and handle calves. At the very least, the calf raiser should be a calm, nurturing person.When the heifers get older, they can be further tamed and quieted down by a person walking in their pens every day. During this time, they will learn the sound of the familiar person's voice and footsteps. He or she should also wear the same clothing that the milkers wear such as a yellow apron. This will help the heifers to associate milker clothing with a good experience. When the heifers first go in the parlor, they can be calmed by the sound and sight of a familiar, nice, safe person.

Sometimes cows require veterinary treatments which may cause some pain or discomfort. It is important that these experiences are not associated with milking. To prevent associations with milking, never give an injection when a cow is in a milking stall. The cow should be taken to a veterinary area for treatment. She then learns that the rest of the dairy is "safe."

If possible, milkers should not give injections. If this is not possible, then the milker should wear something very different such as removing his yellow apron and putting on a big blue hat. The cows then learn that they can relax when they see the yellow apron, and the only time they will be anxious is when they see the blue hat. The hat should be a really wild one that no other employee would ever wear. It should be put away after the veterinary treatments in a box where the cows cannot see it. This will work unless a cow has had a bad experience with yellow aprons when she was a calf. Cows do not recognize human faces; they recognize places, smells, voices, distinctive clothing, and certain objects.

To avoid this association, the animal's first experience in the stanchion should be eating. If the calves are gently trained to eat in stanchions, they probably will not associate them with needles, even if they have received injections in them. It is more likely cows will associate the needles with an object such as a red "sharps container" with needles. They will be relaxed when they can't see the container.

W. D. Hoard's wisdom has now been proven with science. Scientists have mapped the fear circuits in the brain, and they know how these circuits work. Dairy managers can use this information to train employees on the importance of treating dairy cows with kindness.

PDF of this article available here.