Model what Mom would do

From the moment of birth, calves learn how to interact with us. Make it a pleasant experience, and you'll have calmer cows when they enter the parlor. 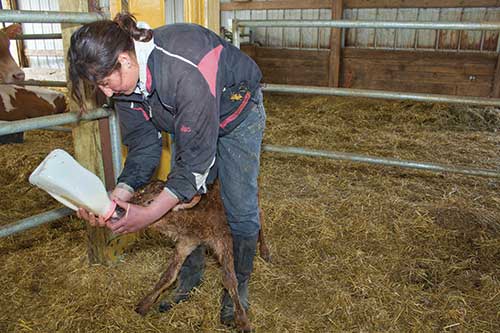 Let's face it: the long-term economic health of the dairy industry depends on the well-being of our calves. In the two-year span from birth to freshening, the events that occur in the first three months are the most important to the development of the dairy herd. This initial human and animal interaction provides a profound opportunity to establish a low-stimulus relationship between employees and the future members of the milking herd. Careful handling during this time will result in safe, productive, minimally reactive dairy cattle and, in turn, improve the financial picture of the farm business.

We've adapted calf rearing
Discussions about animal temperament typically focus on "nature or nurture" - genetics or the environment. Hundreds of years ago, dairy cattle were selected for tameness, and recent genetic advances have focused primarily on milk production. Dairy cattle behaviorally are the same animals as they have been for a long time. But dairy husbandry and management have changed drastically.

Until the last few decades, calves learned about life while following their mothers. Now, calves on North American dairies rarely get to learn how to operate in their environment from their dam. Instead, calves spend the first 45 to 70 days learning that food and water come from humans. First-calf heifers are also affected by husbandry changes. From Day 1, our fresh cattle are expected to behave like experienced milking cows. We need to evaluate how our handling of cattle in all life stages affects how they respond to us.

Short circuit their escape tendencies
Ask yourself the following question. In the first few hours after birth, do your newborn calves appear to escape human presence? Every newborn calf will undergo some degree of distress due to reduced oxygen levels in the blood. Healthy calves will be able to breathe normally and fix the oxygen deficit created within the first few minutes of life.

This process will eliminate acidosis by raising the blood pH to normal levels. The newborn calf is also influenced by the immediate flood of environmental stimuli, and yet they rarely attempt to flee. This maternity period can range from less than 24 hours to 72 hours before transition to hutches or group pens will occur and significant human interactions begin.

Add to that the fact that cattle learn every waking hour and are a prey species, their tendency is to quickly learn that rough or fearful events should be avoided. Aggressive handling teaches calves that humans are rough, and the resulting escape behavior is rewarded because the problem stops. This leads to running behavior when humans are present. Instead, there are a number of specific things that can be done to safely and gently handle young calves.

Model the interactions they seek
A large percentage of dairy cows calve at night, when it's darker, presumably quieter and safer. This is a trait common to many prey species that evolved to give the newborn time to get steady enough on its feet to avoid predation. To simulate natural conditions, it is best to provide a spacious calving pen, well bedded like how it would be found in a grassy area. Lower the intensity of the calving pen lights, and dim maternity room lights to simulate nighttime and the secluded area a cow would typically seek out. This is about natural conditions a cow would seek, not what modern dairy business has created.

Once the calf has been born, all human handling should be gentle, slow and predictable. Touching the calf is necessary, but quick movements may startle it. Using slow, predictable movements will teach the calf to react calmly to you. Avoid dragging calves by the extremities; the ears, legs or tail. Predators grab ears, legs and tails, and that is painful. Mother cows don't exhibit that behavior; they nudge calves to their feet. Humans, too, should nudge calves rather than handling them roughly.

Pressure receptors in the skin are not the same as pain receptors. Calves quickly associate the motion just preceding a painful event and the pain. The resulting avoidance reaction in the calves and an adverse memory of the interaction may last for minutes or forever. If the calf is breathing normally but appears dopey, rubbing it with a dry towel is appropriate.

Fluffing the hair as it dries simulates a cow licking the calf's body. Vigorous rubbing can be too rough. Slapping the calf or excessively jostling them to get them to breathe faster and deeper serves only to teach them that humans are associated with discomfort. If the handler believes the calf is breathing too slowly, consult your attending veterinarian rather than applying rough treatment to stimulate faster breathing.

When bottle feeding or tube feeding, how about easy-does-it? Again, use the mother as a model for nursing. Udders are shrouded in shadows, and the calf's head is turned up and into shadowy darkness, not up into blinding light. If the best you can do is to cover the calf's eyes when bottle feeding, then cover the eyes. You will find that reactive calves calm when their eyes are gently covered.

Though science has asked us to provide three liters or good-quality colostrum to the stomach of the calf within 30 minutes and a fourth within an hour, do this as gently as possible. Make the experience pleasurable and pleasant, not rough. All of this prepares the calves for peaceful life in and around their human counterparts.

If human presence is associated with unpleasantness, the calf will remember it and overreact to almost all human movement, not just the type that resulted in the pain. Roughness creates reactive cattle, and fast-moving calves are prone to injuring staff and themselves. Calves that overreact to human presence merely learn to run everywhere they are moved on the farm, and that encourages other herd animals to run with them.

That means they run through alleys, into chutes, into fences, into each other and away from the milking parlor. Easy does it is best. The calf is absorbing all of the experiences, pleasant and unpleasant, especially the painful encounters. In the end, calves treated gently react slowly, and calves treated roughly learn to be reactive cows later in life. Low-energy handling leads to low reactivity in our livestock.

Use IV calcium when it best helps the cow
Hoard's Dairyman Intel
Related to:
animal care
In Animal Care