Welfare should not forget animal learning

By Don Höglund, D.V.M. And   Bonnie Beaver, D.V.M.
Höglund is CEO of the Livestock Trust Institute in Raleigh, N.C. Beaver is a board certified veterinary behaviorist and a professor of veterinary medicine at Texas A&M University.

Biology, nature, feelings
For farmers, biological functioning has clear economic influence. Indicators that assess biological functioning of dairy cattle include illness in the population, death rate, lameness and milk production. The inclusion of these as indicators of welfare is not controversial, but consumers and welfare scientists are making it clear that high productivity and the absence of disease are not inclusive enough to define good welfare.

In fact, some say that milk production and other measures of productivity are poor indicators of welfare because so much of the variation in performance is due to welfare-neutral factors like nutrition and genetics. Milk production and healthy animals are certainly important to farmers and the future of farming.

A second theme that arises in research on the definition of animal welfare is naturalness - allowing the animal to live as naturally as possible. Often this is defined as access to the outdoors with the freedom to roam. While frequently identified as a high priority in public opinion surveys, this concept often introduces harmful elements.

As an example, full-time pastured cows are exposed to climatic extremes, parasites and predators. They also get less than optimum nutrition. The consistency of consumer concern about "unnatural" farm practices means that the industry cannot ignore this aspect of welfare, but it is the issue that could be most difficult for animal agriculture to accommodate.

Finally, multiple consumer surveys indicate that how animals "feel" is a core welfare concern. This is challenging because direct measurement of the feelings of non-human animals is impossible. Indirect measures are difficult to validate and are subject to significant debate. There is no apparent consensus among scientists as to whether knowing how an animal "feels" is even possible.

Of course, consumers have no particular interest in parsing the variety of scientific theories, but if consumers believe that animals can have feelings similar to those of humans, the results could be devastating to agriculture as we know it. At the extreme, ownership of animals could be at risk.

How does that concern dairy farmers or anyone involved in animal agriculture? The concept of consciousness in animals (feelings) influences consumer perception like no other. In North America, we do not consume companion animals, in part, because of our perception of them as thinking and feeling creatures. As the public debate shifts relative to the type of feelings a cow might have, it is entirely possible that livestock will no longer be a source of food.

Animal consciousness debate
One of the main drivers for the animal emotion quandary has been a thoughtful, passionate, but polarizing theory referred to as the "Affect Program." For at least the last 50 years, "Affect Theory" and other basic emotions research have influenced the animal welfare and emotion debate.

These theories have inspired research on animal behavior and welfare that is shaping education curricula, industry and governmental demands on farmers, "codes of practice" and assessment/audit programs. In other words, these kinds of theories concern the day-to-day life and eventually the existence of modern dairy farming.

The animal consciousness debate has been discussed extensively in the literature, but, recently, this theory and the research that was used to form the theory have been called into scientific question. A brief explanation of "affect" and "consciousness" is needed in order for dairy families to understand how their lives are touched by such research. This is not a moral argument and is certainly not a denial of conscious awareness in animals.

Affect circuits are said to be hard-wired pathways somewhere in the brain, and they were passed down through evolution to present day mammals, including cattle. As an example, Affect Program advocates tell us that a cow's sensory system detects threats in the barnyard, and the "affect system" mediates what cattle do when challenged and potentially how they think and consciously feel about it.

Consciousness means that cattle are awake, alert, responsive, able to solve problems, execute complex behaviors and can learn from experiences. We know that consciousness in humans also means we are aware that the stimulus is present, that one's self exists in time and space, and that we are sensing, behaving and solving problems.

We do not know if that is true in cattle because the animal does not have language skills. Based on their sensory and genetic differences, it is unlikely that the animal's perceptions are identical to those of humans. This is not a moral issue: it is what science has told us.

To complicate matters, some advocates describe how facial expressions are evidence that the animal has emotional feelings. Also, affect research has relied heavily on electrical brain stimulation studies. These are imprecise and do not measure subjective conscious feelings in the first place.

Behavior and physiological changes are just that and not necessarily indicators of conscious feelings. Hormones can fluctuate, heart and respiratory rates can go up and down, the cow can flee or do nothing. Defending against challenges, regulating fluid levels, reproducing, maintaining body temperature and consuming nutrient energy are survival behaviors that do not necessarily depend on consciousness.

Because humans can certainly introspect when challenged, we figure cattle must be able to have the same feelings. We should not try to invent mental motivations for animal survival behaviors when these same behaviors do not require mental motivations in humans. Rather than spending time arguing about whether an animal has feelings or not, understanding how cattle learn can help improve their welfare. That is measurable, and it has practical applications on-farm. 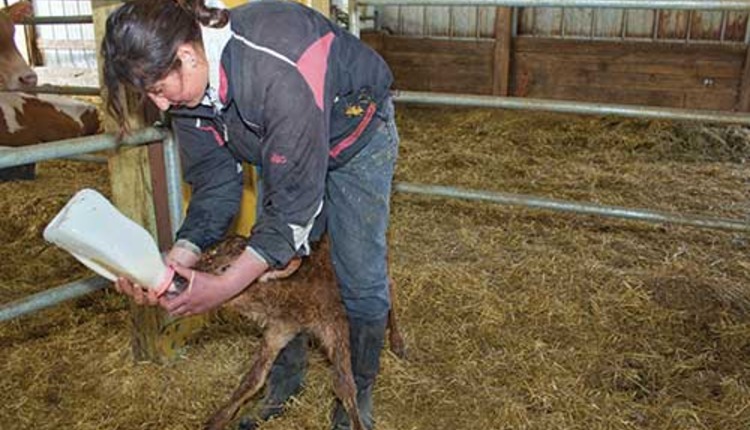 Animal Care
Model what Mom would do
comments powered by Disqus