Dry cows feel the heat, too

Heat stress during the dry period lingers long into lactation. 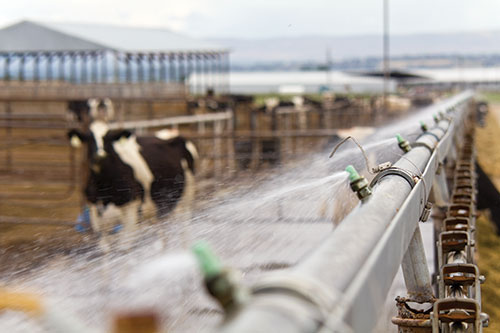 Heat abatement is not just for the milking herd. Dry cows that are cooled are healthier, breed back sooner and produce more milk.

Heat stress has substantial impacts on milk yield during lactation. This is partially a result of reduced feed intake but also due to the drain on productive function as the cow spends energy on heat dissipation. While the acute effects are well described, heat stress during late gestation can also dramatically impact the level and efficiency of milk production in the next lactation.

Across five studies, we found that dry period cooling improved yield an average of 10 pounds per day relative to cows that were heat stressed when dry. More importantly, these effects persisted through that entire lactation even if the cows were cooled when in milk.

Mammary cell loss was not a result of heat stress, but hot weather did cause a significant reduction in the growth of mammary epithelial cells during the dry period. This suggests that the capacity for milk production was greater in the cooled cows relative to those that were heat stressed. Because mammary epithelial cell loss appears to follow the standard lactation curve, starting the lactation with more cells leads to persistent yield growth.

Heat stress substantially lowers dry matter intake of mature cows before calving. Typically, heat stress reduces intake by about 2 pounds a day. Over the course of the dry period, this results in lower body weight gain and lower body condition scores relative to cows that are cooled. The metabolic profiles - nonesterified fatty acids, glucose and insulin - do not differ between cooled or heat-stressed dry cows during the dry period; however, we have observed significant differences in the metabolic responses of cows after calving as lactation advances.

Cooled dry cows are less responsive to insulin, have higher concentrations of NEFAs in circulation and lose more body weight than heat-stressed dry cows during lactation. These responses are consistent with greater milk yield. Therefore, all of the metabolic effects observed after calving in cows that received heat abatement when dry are due to their higher milk yield and are not lingering effects of cooling while dry.

Cooling boosts immunity
Immune status is influenced by the environment to which an animal is exposed. Since transition cows are at heightened risk for disease, we examined the impact of dry period heat stress on various indicators of innate and adaptive immune function.

Adaptive immunity is the arm of the immune system that has "memory" of pathogen exposure and includes the production of antibodies that then provide protection against future exposure to that antigen. During the dry period when cows were either heat stressed or cooled, we observed greater production of antibodies to a challenge with an innocuous antigen, suggesting that responses of the adaptive arm are compromised with heat stress.

Innate immunity is a less specific response to an antigen and can be measured using a number of assays that provide insight into the relative ability of the cow to respond to a pathogen. In a number of cases, we have found substantial improvements in the response of cows that had been cooled when dry relative to those under heat stress.

Perhaps of greater interest, we have not observed any negative responses in cows under cooling compared with those that were heat stressed, despite the fact that the cooled cows produced more milk. This suggests that high production and good health can coexist with proper management.

Reproduction takes a hit
These observations are consistent with responses of cows in a commercial setting when season of calving was examined. We collected data from over 2,500 calvings over a four-year period from a large herd in Florida and assessed the effect of a cool season dry period (cows calving in December, January or February) versus a dry period that occurred in a hot season (calving in June, July or August). It is important to note that all the cows were managed the same after calving, and appropriate cooling was in place for all cows during lactation.

Lactation milk yield was 1,200 pounds greater in cows that calved in the cool months. Cool-season cows also had less mastitis. Of particular interest, the cool cows required fewer services to become pregnant and were bred at fewer days in milk relative to the cows that calved in hot months, even though the breeding of the cool cows occurred during the hottest months of the year. Overall, the cows that were dry in the cool season had greater milk yield, improved reproduction and less disease than herdmates that were dry in hotter months, and at the same time produced more milk.

Implementing cooling during the dry period is no more complex than cooling lactating cows. Combinations of soakers, fans and shades that help cows maintain a body temperature around 101.5°F to 102.0°F over the course of the day are required during periods when the THI (temperature humidity index) exceeds 68. Note that a THI of 68 is often not perceived as detrimental to cow performance, but studies indicate that is the point when cows respond with physiological countermeasures that diminish productive functions.

To determine the level of heat strain, body temperature should be monitored in a few cows throughout a day to accurately assess the level of heat stress in that housing situation. An alternative approach is to measure respiration rate throughout a day to determine relative heat load. We have observed that respiration rates above 65 breaths per minute in a dry cow indicate significant heat strain that requires active cooling.

Cooling dry cows is easy to implement and benefits production, reproduction and health of cows. Cooling cows for the entire dry period is important to maximize the effect. Remember that heat strain occurs in dairy cows at temperature and humidity combinations that may not be perceived as a challenge by people. 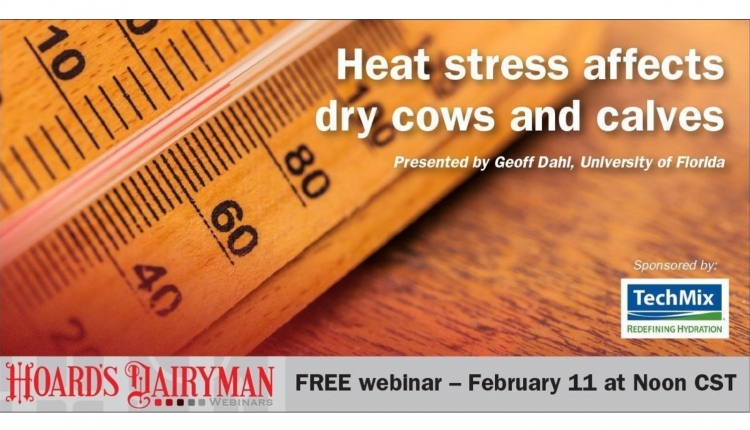