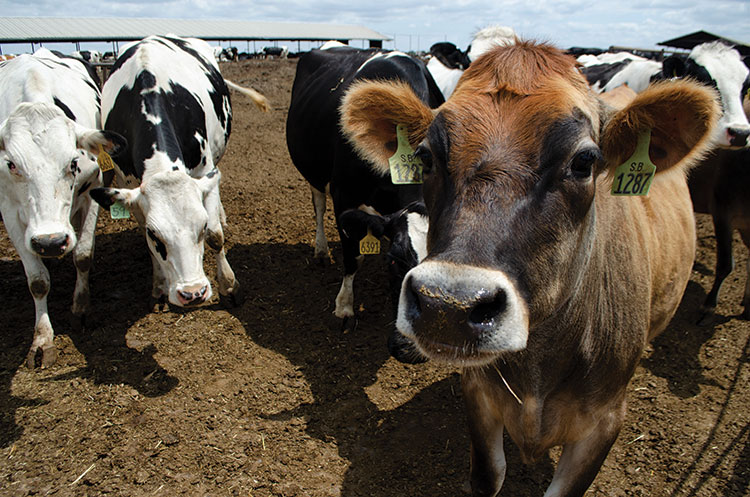 During the dry period, heat stress causes an estimated $800 million in losses for the U.S. dairy industry. Heat abatement strategies are being used more frequently by dairy farmers for dry cows, especially in the southern U.S., but they are rarely used for cattle that have never calved before (nulliparous heifers).

Whether that compromised growth also occurs in cattle that have never calved before is unknown. On many dairies, heifers are housed on pasture with minimal or no heat abatement; thus, they are often exposed to significant amounts of solar radiation, leading to higher susceptibility to heat stress. These heifers are still growing and accumulating total body size as their first gestation progresses. Exponential mammary growth is occurring during this stage of development. Therefore, any impairment heat stress causes in this physiologic state may have long-lasting impacts on productivity.

This heat stress might also affect the in-utero calf. In addition to understanding the impacts on the dam, we also set out to understand if the postnatal health and performance of the calves would be impacted from experiencing 60 days of cooled or heat-stressed intrauterine environments.

Pregnant heifers were moved from pasture into a sand-bedded freestall barn approximately 60 days before they were expected to calve and were separated into two groups. Heifers were either provided access to the shade of a freestall barn (the heat-stressed group) or shade plus access to soakers and fans (the cooled group). All heifers were fed the same total mixed ration (TMR) during late gestation and managed identically.

After calving, all of the heifers were housed in a sand-bedded freestall barn with access to cooling (shade, soakers, and fans) and milked twice daily. Production was recorded through 15 weeks in milk, and the impact of in-utero heat stress on growth and immune status in the calves was examined.

The lack of access to fans and soakers led to higher rectal temperatures in the heat-stressed heifers relative to the heifers that had access to active cooling. Other indicators of excessive heat load, including respiration rate, skin temperature, and sweating rate, were elevated in the absence of cooling.

In addition to these indices, core body temperature was recorded across time, and it was clear that the heat strain became magnified as parturition approached. This is, in part, explained by greater heat production from the in-utero calf, as it gains approximately 60% of its body mass during the late-gestation period. Whereas dry matter intake was slightly reduced in the heat-stressed heifers as a group, no significant shifts in body weight or body condition between the heat-stressed or cooled heifers were detected.

Consistent with previous work in mature cows, the heifers that were cooled during the last 60 days of gestation produced 8.6 pounds more milk per day than the heat-stressed heifers. While there was no difference in component percentages, yields of fat and protein were lower in the heifers that were heat stressed during late gestation when compared to the cooled heifers.

Heat-stressed heifers calved about four days earlier than the cooled heifers, but calf birth weights did not differ. Calf growth, from birth through weaning, was not affected by exposure to in-utero heat stress, either.

The quality of the colostrum produced by the dams was not affected by heat stress; however, the passive transfer efficiency was lower in the calves born to heat-stressed dams, and they maintained lower circulating immunoglobulin G (IgG) concentrations through the preweaning period. This is an indication of a sustained lower immune status in these calves that experienced in-utero heat stress during the late gestational period.

As for milk production, in mature cows, the impact of heat stress during the dry period appears to start with a reduction in mammary gland growth that leads to lower milk yields in the next lactation. However, in animals giving birth for the first time, there is no “dry period.” Yet, these results clearly show that there may still be impacts of heat stress on mammary gland growth in first-calf heifers.

The behavior of both groups of heifers was also monitored before and after calving. Examination of the effects of late-gestation heat stress on those behaviors allows for a better understanding of how nulliparous heifers may be affected.

To characterize behavioral activity, heifers were fitted with a leg tag, which measured daily lying time, number of steps, and standing bouts, and a neck tag that tracked eating and rumination times. We found heat-stress exposure during late gestation altered the behavior of nulliparous heifers and had lingering behavioral effects after parturition.

Heat-stressed heifers altered their behavior by spending more time eating during both the pre- and postpartum periods. Interestingly, during the prepartum period, even though eating frequency was similar between groups, heat-stressed heifers increased meal size at night and reduced rumination and lying time. This was likely in an effort to minimize internal heat production and to optimize heat loss to the environment.

These results highlight the importance of considering cooling management strategies not only for lactating and dry cows but also for late-gestation heifers. Cooling systems for late-gestation, nulliparous heifers appear to benefit milk performance, calf health, and animal welfare.

The cow that couldn’t jump over the moon
HD Notebook
Related to:
animal care, transition
In Animal Care